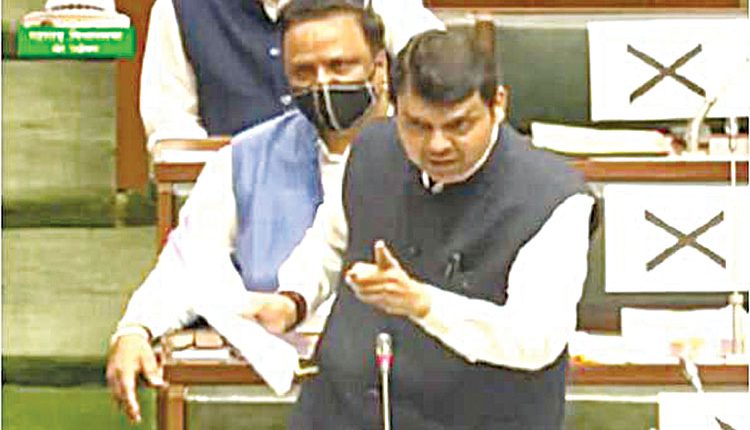 Mumbai, Dec 15 (Agency) Maharashtra Assembly Leader of Opposition Devendra Fadnavis on Tuesday attacked the Maha Vikas Aghadi, asserting that the government acted in a revengeful manner against Arnab Goswami and Kangana Ranaut. He was speaking at the assembly’s winter session which entered its’ second and final day. Former CM Fadnavis said that the remarks passed by Republic TV anchor Goswami against the CM and his minister son Aaditya in the Sushant Singh Rajput case is not even acceptable to him.

But, he further said, the MVA should have rebutted the claims in a proper manner instead of “illegally acting against the anchor and his news channel”. He told that the Supreme Court ruled against the MVA by giving bail to Mr Goswami in the TRP scam case. Commenting on the Ranaut episode, he cited the Bombay High Court’s stricture passed against the Brihanmumbai Municipal Corporation (BMC) for razing the property belonging to ‘Queen’ actress. The critics reasoned that the BMC resorted to the demolition of the “illegally” constructed part of the property after the actress repeatedly slammed the MVA in Sushant Singh case, and hurled wild allegations. The war of words took a dramatic turn when Ms Ranaut likened Mumbai to PoK in her tweet, drawing sharp criticism from firebrand Shiv Sena MP Sanjay Raut. While ordering to compensate the actress for the demolition act, the High Court also admonished Mr Raut for his choice of words while responding to the controversial tweet. Countering Mr Fadnavis, Parliamentary Affairs Minister Anil Parab apprised that the MVA is filing a review petition in the Supreme Court in the Goswami case.