Grim battle ahead of Mamata 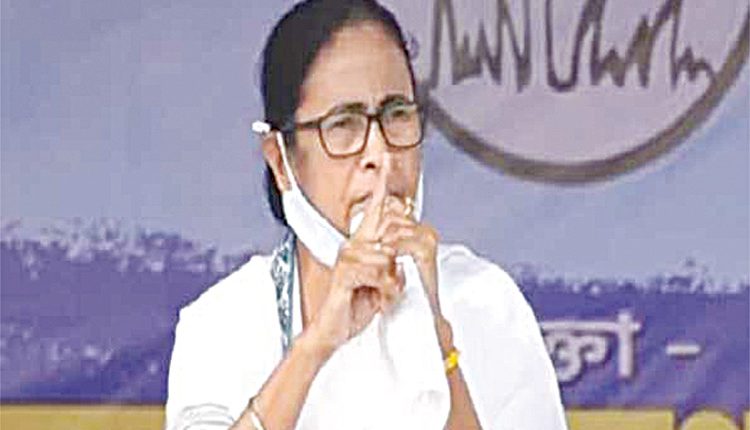 Kolkata, Mar 8 (FN Agency) West Bengal Chief Minister and Trinamool Congress (TMC) supremo Mamata Banerjee will face a tough contest in the state assembly election against Suvendu Adhikari, her former top aide who defected to the BJP in December, in high-profile Nandigram seat of East Medinipur district. Nandigram, the seat Ms Banerjee chose to fight on, was once the epicentre of a farmers’ movement that propelled her and TMC to power in Bengal ten years ago. But Suvendu was the man who worked to build the party’s base in Nandigram. However, the TMC supremo said that everyone is aware of the history, in a bid to showcase herself as the bigger leader and throttle Suvendu’s attempt to cash in on the movement’s history. After about 14 years Nandigram becomes a hot spot in West Bengal elections immediately after Trinamool Congress supremo Mamata Banerjee during a rally in mid-January in East Medinipur announced her intention to contest from the seat where some 65, 000 Muslim voters reside among the 2.5 lakh electorate.

A former bastion of CPI (M) Nandigram, first came to the limelight in 2007 where the peasant’s movement against the land acquisition for a special economic zone (SEZ). led to finish the 33 years of the Communist government in 2011. People retaliated after 14 people were killed in 2007. The Adhikari family came to the fore during the peasant movement in 2007 and CPI(M)’s bitterest rival Mamata Banerjee immediately joined the movement. Political experts now say the electoral battle will be nothing short of a “war for political existence”. “For Ms Banerjee, who has a fiery 40-year-long career in politics, the election is to prove her credentials as the actual claimant to the Nandigram movement and to establish that the Mamata magic is yet to fade,” said a veteran political analyst. “For Suvendu, who is in his 25th year of his political journey, it is almost a do or die situation. If he does not win, he may lose his relevance, not just in the BJP, but in politics.” Suvendu, who won the 2016 assembly poll on TMC ticket over Communist candidate Abdul Kabiur Sheikh has huge support in East Medinipur because they belonged to a political family headed by Sisir Adhikari. Last year during the Nandigram diwas, it was contested who led the peasants movement, the Adhikari family or the TMC supremo.

However, the 2021 assembly poll has an answer, the political observers in Bengal opined. They say it is now a prestige fight between Ms Banjerjee and Suvendu Adhikari and there is no issue in Nandigram for BJP, which is fighting the assembly election in Bengal with Prime Minister Narendra Modi’s face. The electoral battle for the Nandigram seat added a new dimension this time as the CPI(M) led Left parties conceded the seat to newly launched Indian Secular Front ( ISF) headed by Furfura SharifPirzada Abbas Siddique. Siddique claimed that ISF will have its say in forming the next government in West Bengal. ISF sources said that they are considering a candidate from the Furfura family for the Nandigram seat. Mamata Banerjee vs Suvendu Adhikari confrontation has been in the pipeline since the chief minister compared the latter to Mir Jafar and said such betrayals have been taking place for centuries. Ms Banerjee during the rally at East Medinipur had said that Bhowanipur, from where he was elected in 2016, is her elder sister and Nandigram is her younger sister.

She had insisted and told party leader Subrata Bakshi to make sure of a ticket from Nandigram for the 2021 poll. “I will contest from Nandigram. Nandigram is my lucky place,” Ms Banerjee said and also urged voters of Bhawanipore, her current constituency, to understand. In case I am unable to contest from Bhawanipore, someone else would contest.” The same day, Suvendu publicly took up the challenge and declared in Kolkata, “If I do not defeat her with half lakh votes in Nandigram, I will quit politics.” For Ms Banerjee, the Bengal battle in Nandigram is a more personal fight because of her one-time protégé – Suvendu. “Nandigram is not a challenge for me. I am going to Nandigram to defeat her (Mamata Banerjee) and send her back to Kolkata. I thank the national party leadership for the responsibility given to me. I will work to make lotus bloom in Nandigram and across West Bengal,” Suvendu said after BJP leadership on Saturday fielded him from Nandigram against TMC supremo Mamata Banerjee, setting the stage for a high-profile contest from the seat in the state assembly elections. “She (Mamata Banerjee) is going to lose this election (in Nandigram) by over 50,000 votes,” he added. Hitting out at TMC, Suvendu said the party has turned into a private limited company, adding, “The chairman of the TMC private limited company is Mamata Banerjee and the ‘tolabaaj bhaipo’ (corrupt nephew) is its managing director. Mananiya (Banerjee) has bought a thinker with Rs 500 crore. The money was siphoned from MGNREGA, PM Awas Yojana and the smuggling of coal, sand and cow,” he said.

Suvendu said the TMC supremo is not a daughter of Bengal but the aunt of infiltrators and Rohingyas. Mentioning TMC’s slogan ‘Bangla nijer meyekei chaye’ (Bengal wants its own daughter), Suvendu said, “Nobody accepts you (Mamata Banerjee) as their own daughter. You are the ‘khala’ (aunt) of infiltrators and Rohingyas.” “The Trinamool Congress (TMC) and Left-Congress alliance both want to divide Bengal with appeasement politics. If TMC comes to power again, Bengal will become Kashmir. What happened to the pundits of Kashmir the same will happen to you,” he added.

Goodknight Salutes Women for their #PyaarWaliProtection in a New Digital Film

‘Women in combat roles soon with many schemes coming for them’