From leaving families behind to shunning footwear: The journey of Bharat Yatris 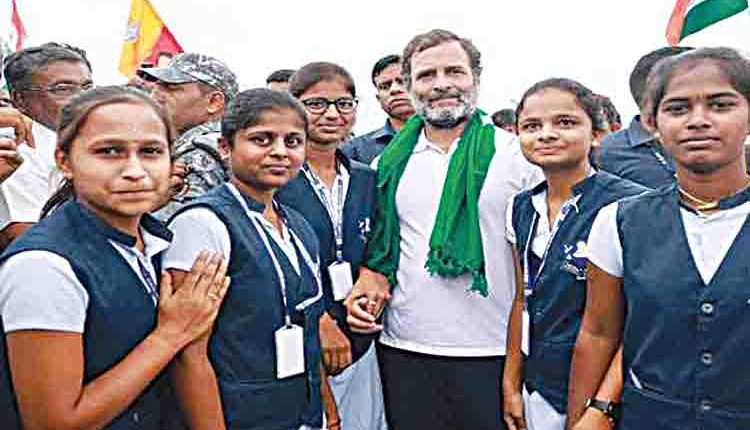 By Anjali OjhaChitradurga (Karnataka), Oct 11 (Representative) Heat has built up in the tents which have no air conditioning and only a few big fans. The flaps have been opened to allow some ventilation as a relief. Inside the tents, Bharat Yatris lie on cots which have cotton mattresses and no sheets. While some sleep after the exhaustion of the morning march, some sit in groups chatting, reading books, or preparing for the march ahead. In one of the tents, reading a book on a cot is Sachin Rao, an officer bearer of the Congress. After the first few days of the Yatra, Rao decided to let go off his footwear. He now walks barefoot, clocking 20-22 kilometers every day along with other Bharat Yatris. “This Yatra is a unique personal space, for 150 days, we are here. It is time to test ourselves. I was not wearing shoes in the camp anyhow, I had this curiosity about how it feels to be barefoot,” Rao told UNI during a break at the Bharat Jodo Yatra. Even as controversies have found their ways into the yatra, for those participating it is more of a personal and spiritual journey.” After the first 8-10 days I gave up my sandals,” said Rao, adding that the hot asphalt under his feet felt like a balm, but the rocky patches did hurt.

“It is all about developing a habit,” he said.One month since it started in Kanyakumari, asked about his takeaway from the journey so far, he said, “Now I know it will happen… On the first day I could not have said whether we would be able to do it or not, whether the logistics could be handled or not…”Rao, a member of the Congress Working Committee, sees this as a turning point in Indian politics, where a party is reaching out to people and not seeking votes. “The most powerful thing is that it is not linked to any election. It’s a once in a lifetime thing. There is a non-cynicalness naturally. This is the declaration of a dream for a country. There is an openness about it, and lot of people are coming because of it,” he said. For Rao, it is a spiritual journey, as it is for many others.For Pooja Parajita Choudhary, a mother who has left a one and half year old daughter back home in Bidhanpur, West Bengal, the journey is about sacrifice.”I am learning what sacrifice is. We are learning what does a family mean? We usually think our parents, spouse, children are our family… Now we are realising the whole country is our family,” Parajita told UNI. “Everything here is limited, there is limited washroom, limited space… We are living like this. But this sacrifice is giving us happiness. My parents, or my children are not the only ones I am making smile, the people we meet on the way, when we see them smile we feel happy.

We feel we are part of a great revolution,” she said. The washrooms at the camp sites are mobile porta cabin toilets. These box toilets are used by all, even the senior most Congress leaders. A routine day for a Bharat Yatri starts around 4 or 5 am. There isn’t much time before the flag hoisting, which is usually done around 6 am. The march starts after that, breaking around 10 am, and resumes at 3 p.m. for the evening march.Noori Khan, a Congress member from Ujjain, Madhya Pradesh said she felt the march was impossible for her, and that is what pushed her to participate. Khan has left behind her two children, one of who appears for the 12th board exam next year. “I asked my children if I should go, they told me I should,” said Khan who has been linked with Congress’ student’s wing National Students Union of India since her college days. “It is only our will power that is making us walk,” she said. Arti Nirmohi, who comes from Shimla, Himachal Pradesh, starting the day early was not the most difficult part. “In the mountains, getting up early is routine. However, the distance that we are waling every day is not little. Initially, we used to feel fatigue, or feel like we have not been able to sleep enough, but now, we just have our mission in our minds,” said Nirmohi.

For Avani Bansal, a Delhi based advocate who is among the Bharat Yatris, a major inspiration came when a blind person from Bangalore joined the Yatra. “It made me think about the blessings we have, and also about how less is awareness about organ donation. Many Yatris here have decided to sign up for eye donation after this experience,” said Bansal.S Pyari Jaan from Mysore, Karnataka meanwhile said it the love that they were getting from people is what is keeping them going.”We were in Tamil Nadu, then Kerala… We saw different colours of the culture, tasted different cuisine, but the biggest thing is the love we received. Even when we could not understand the language, there was no barrier… This journey enriches us,” she said. The Bharat Jodo Yatra, which was launched at Kanyakumari, Tamil Nadu on September 7 with the foot march starting on the morning of September 8, has so far covered 905 kilometers across three states. The Yatra will cover over 3,500 kilometers through 12 states, and culminate in Jammu and Kashmir.