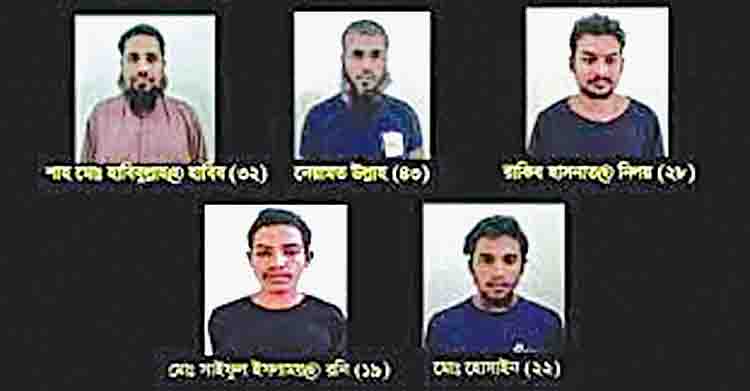 Dhaka, Oct 11 (Representative) The Rapid Action Battalion (RAB) has announced the arrest of five people, including one of the major financiers of the new militant outfit under which several youths from different parts of the country, including Cumilla went missing. They were arrested from the Jatrabari and Keraniganj areas in the capital. According to RAB, the name of the arrested financier is Md Habibullah Habib, 32. The arrestees are Neyamat Ullah, 43, Md Hossain, 22, Rakib Hasnat, 28 and Md Saiful Islam. Of them, three had left their homes in the name of ‘hijrat. RAB said they had recovered five radical pamphlets, around 300 leaflets and five bags from the arrestees. RAB also has disclosed how the arrested people used to motivate others towards militancy. RAB further said that arrested Habibullah used to lead the prayer at the Quba Masjid in Cumilla. Besides, he used to teach in a madrasah. He joined the ‘Jamatul Ansar fil Hindal Sharqiya’ in 2020 through Neyamat Ullah. He was one of the major financiers of the organisation. He used to lead the ‘dawat’ (inviting to join the ideology or recruitment). He used to collect funds for the organisation in various ways and used to provide money for militant activities.

He also ran a madrasah for two years in the Naikhangchhari area of Bandarban. He used to collect students from different hilly areas and get them admitted to his madrasah. So far, he has recruited around 15-20 members and has sent them for training. Another arrestee Neyamat Ullah used to be a teacher at a women’s madrasah. He got involved with the organisation through a local person in 2019. Apart from being involved in the dawat (member recruitment process) he was also involved in supervising the youths who had left home. He also had provided shelter to the youths who had left home at different stages.Arrested Hossain is an electrician and a painter by profession. He has been involved in various activities of the organisation for the last one year.Rakib used to work as a delivery boy in a courier service. He got in touch with the organisation through Hossain. Incited by radicalism, he went missing some two months ago. And Saiful is a mason by profession. He went missing in August from Noakhali. He got involved with this radical militant outfit through a person in Noakhali.Earlier on 23 August, some eight youths went missing from Cumilla Sadar.

The primary investigation revealed that motivated by radical ideas, they had left home for militant activities. Meanwhile, the RAB detained four youths while they were preparing to leave their home on 6 September and later handed them over to their families. Shartaj Islam Niloy, 22, one of the eight youths who went missing from Cumilla, returned to his home in the capital’s Kallyanpur area on 1 September.According to the RAB, based on the information provided by Shartaj, RAB conducted raids in Munshiganj, Narayanganj and Mymensingh areas on 6 October and arrested a total of seven people, including three youths involved in the invitation, supervision and sheltering activities of the militant outfit. The arrested persons provide important and sensational information about the militant outfit.As part of that, the detective branch of RAB headquarters and RAB-10 conducted a joint drive in the capital’s Jatrabari and Keraniganj area and arrested the five on Sunday night. RAB says, according to the information provided by the people arrested at different times, the number of youths missing from different parts of the country is more than 50. They had been missing for one and a half months to two years. Legal action against the arrested persons is underway, said RAB.

From leaving families behind to shunning footwear: The journey of Bharat Yatris