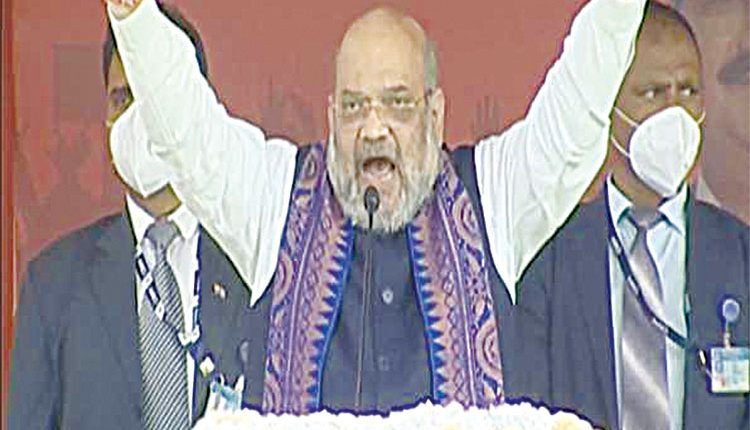 Cooch Behar, Feb 11 (FN Agency) Union Home Minister and senior Bharatiya Janata Party (BJP) leader Amit Shah on Thursday iterated that the BJP will win over 200 seats in West Bengal. Addressing a rally in poll-bound West Bengal here today, Mr Shah said the BJP’s juggernaut cannot be stopped by anyone. He said, “The ‘Parivartan Yatra’ will end the corruption propagated by ‘Bua-Bhatija’ attacking Mamata Banerjee, and her nephew Abhishek.” “This ‘paribartan yatra’ is to change the situation of Bengal, to stop border intrusion.

We will make a state where a bird will also not be able to cross the border,” the union minister said. Mr Shah said when the election comes to an end, Ms Banerjee too will chant ‘Jai Shri Ram’. “Jai Shri Ram chant is an insult to Mamata Banerjee. Why? So many people take pride in this chant. Why do you get insulted by this slogan? Because you have to appease one section for votes,” he said. “Bengal worships Devi Durga but for that, you have to go to the court. Bring us to power and it will be a land of both Ram Navami and Durga Puja,” Mr Shah said. The BJP leader claimed that more than 130 BJP workers were allegedly killed by “TMC goons”, and said no action has been taken. “TMC” goons” cannot stall BJP’s march to power in West Bengal and once our government comes to power, each of the murderers will be sent to jail,” he said. The union minister said Mamata Banerjee led state government has deprived the state of central schemes. “TMC did nothing for the people of Bengal,” Mr Shah said. “Once BJP comes to power in Bengal, in the 1st cabinet meeting, we will transfer the money from the Central scheme to farmers that were blocked by the Mamata government,” he said, “Mamata Banerjee will not be the Chief Minister post-May,” Mr Shah said.