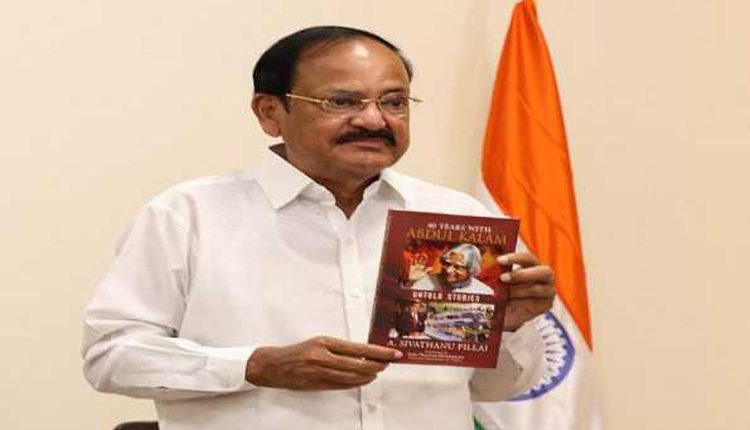 New Delhi, Dec 3 (Agency) Vice-President M Venkaiah Naidu on Thursday called upon youngsters to draw inspiration from former President APJ Abdul Kalam and work towards building “a strong, self-reliant and inclusive India”. Like Dr Kalam, the youth should think out-of-the-box and use technology for providing solutions to the various economic and societal challenges that impact large sections of India’s population, he urged.

Speaking at virtual release of the book, ’40 Years with Abdul Kalam-Untold Stories’ authored by Dr Sivathanu Pillai, Mr Naidu recalling his interactions with Dr Kalam when he was in DRDO and later as the President of India. Describing Dr Kalam as a true Karma yogi, the Vice-President said he was an inspiration to every Indian and was aptly called a ‘People’s President’, who endeared himself to every Indian especially the youth. His contribution to strengthening India’s defence and space capabilities was invaluable. Dr Kalam’s biggest passion was to motivate and inspire school and college students to work with a passion for nation-building activities, he added. As he wanted to channelise the youth energy for nation building, Mr Naidu said he himself was going around the country meeting the youth, motivating them and also seeking fresh ideas from their young minds. The book’s author, Dr A Sivathanu Pillai, ISRO Professor Dr YS Rajan, MD and CEO of Pentagon Press Rajan Aryaa were among those who attended the virtual event.