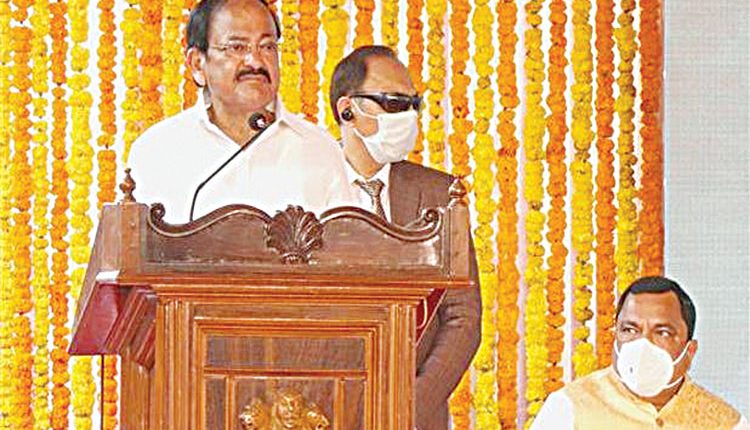 Panaji, Jan 10 (Agency) Elaborating on the importance of legislatures, Vice President M Venkaiah Naidu has asserted that the legitimacy of legislators and law making bodies is critical for effective functioning of parliamentary democracy backed by the much needed trust and confidence of the people. Noting that legislatures are the instruments of according legitimacy for the decisions of both the executive and the judiciary, he raised the prospect of the very legitimacy of legislatures coming into question if they are dysfunctional and law makers do not enjoy the respect of the people they represent.

Speaking to the present and former legislators of Goa on the occasion of the ‘Legislators Day’ at Porvorim, near the city, he urged the law makers to ensure the legitimacy of the law making bodies through ideal behavior and effective functioning both within and outside the Houses. He suggested to the law makers to do so by equipping them with six attributes that would make a significant difference. The Vice President said, “It is the functioning of legislatures and law making bodies that can either make or mar any democracy. Their effective functioning forms the basis of people’s trust and confidence in parliamentary institutions. Unfortunately, there is a certain trust deficit with people’s perceptions about the legislators and legislatures being in the negative based on what they get to see and hear. This deficit needs to be addressed at the earliest.” Urging the law makers to accord priority for the good and welfare of the people instead of being preoccupied with personal vocations and interests and empowerment of self, Mr Naidu stressed that “Representing people is not a part time activity and it shall be the prime responsibility if not full time.

Proper commitment to the cause of the people flows from getting priorities right. Those who have no time for people better not enter the legislatures.” Outlining the other positive attributes expected of law makers, Mr Naidu urged them to develop strong connect with the people they represent to properly assess and understand their difficulties and aspirations, right conduct both in public and inside the legislatures, character based on moral integrity, capacity to understand the emerging complexities and deliver and communication skills for effective communication with the people and all other stakeholders. The Vice President said, “Any legislature is as good as its members.

Legitimacy of both of them are interdependent as each of them draw sustenance from the other.” He said legislator modelled on these six positive attributes would most certainly like the House to ‘Discuss, Debate and Decide’ so that she or he could make useful contribution rather than being disrupted and that is the difference that able legislators can make to the functioning of legislatures. Mr Naidu observed, “Any legislator has the option of either supporting the government or opposing it. Informed opposition to the government’s proposals in fact does a certain good but opposing for the sake of doing it does harm.”

UP fares far better than other states in women safety: NCRB