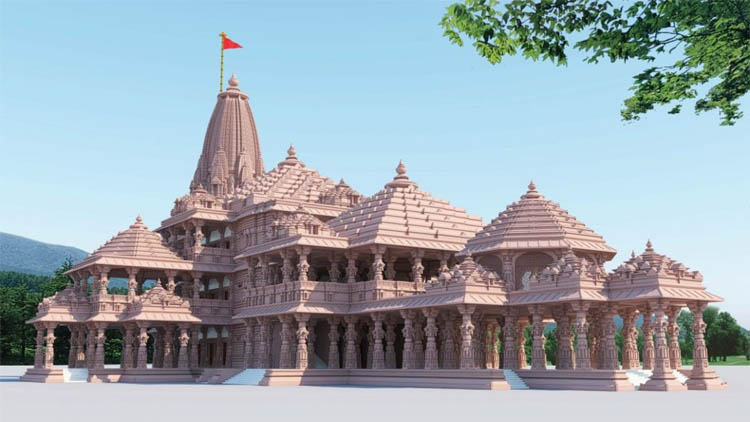 New Delhi, Dec 16 (Agency) ‘Shri Ram Mandir Nidhi Samarpan drive’ will run from January 15 to February 27, Vice-President of Vishva Hindu Parishad (VHP) and Secretary General of Shri Ram Janmabhoomi Teerth Kshetra Trust, Champat Rai said here on Wednesday. ”The support of every Ram devotee from all over the country will be solicited for the grand temple, to be built on the birthplace of Bhagwan Sri Rama in Ayodhya. For this, the Karyakartas of VHP will go from door-to-door with the venerated saints and the rest of the people of society,”

Mr Rai said. Announcing the decision at a press conference here, Mr Rai said that during this intensive and extensive campaign, which will start on Makar Sankranti (January 15) to Magh-Purnima (February 27), VHP Karyakartas will reach out to 110 million families of 400,000 villages of the country and propagate and flourish Ramatwa by connecting the common man directly with Shri Ram Janmabhoomi. With the support of people of every caste, creed, sect, region and language of the country, the Ram temple will actually take the form of a ‘Rashtra Mandir’ (Temple of the nation), he asserted. Addressing the press conference here, Mr Rai said that preparations were underway to construct the temple. Engineers from IIT Mumbai, IIT Delhi, IIT Chennai, IIT Guwahati, CBRI Roorkee, Larsen & Toubro and TATA’s were working on the foundation drawing, he added. The foundation configuration and layout would be finalised soon.

The whole temple would be of stone blocks. Each of the three floors would be 20 feet high, while the length and breadth of the temple would be 360 and 235 feet, respectively. Mr Rai said the temple would make the present and the future generations of the country aware about the historical truths. By going from door-to-door, at least half of the country’s 1350 million people would be made aware of the historical truths of Shri Ram Janmabhoomi. ”From Kashmir to Kanyakunmari and Attock to Cuttack, we won’t leave any corner of the country unvisited. The VHP Karyakartas (volunteers) will reach out to every nook and corner of the country, including the Rann of Kutch, Arunachal Pradesh, Nagaland, Andaman & Nicobar Islands and the mountainous, forest and desert regions of Bharat, to hand out Ram temple literature to people and seek their support. ”People have a strong desire that Sri Ram’s Nativity Temple should come up at his Janmabhoomi soon,” he added. According to Mr Rai, ”Millions of Karyakartas would take part in this historical campaign and the society would voluntarily cooperate and co-create because the work is of Bhagwan (God) and the temple is of Ram”.

”Funds cannot be a hindrance in the work of God. In order to maintain transparency in the financial dealings and transactions, the trust has printed coupons and receipts of denominations of Rs 10, Rs 100 and Rs 1000. ”The Karyakartas will issue coupons or receipts, according to what the society contributes. The picture of Bhagwan Sri Ram’s temple will reach millions of homes.” he added.