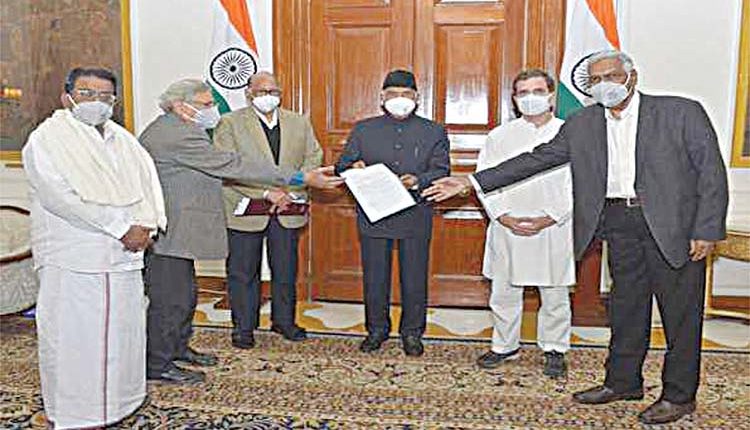 New Delhi, Dec 9 (Agency) A delegation of Opposition leaders comprising NCP Sharad Pawar, Congress leader Rahul Gandhi and Left leaders called on President Ram Nath Kovind at Rashtrapati Bhavan and presented a memorandum seeking repeal of three farm laws agaist which thousands of farmers have been protesting on the borders of the national capital. Also present were Sitaram Yechury of the Communist Party of India (Marxist), D Raja of the CPI and T K S Elangovan of the DMK. Addressing the media after the meeting with the President, Congress leader Rahul Gandhi told reporters that the delegation had asked for a repeal of the three Bills. “We informed the President that it is absolutely critical that these anti-farmer laws are taken back.”

Though 24 Opposition parties are backing the farmers’ protest and were to submit the memorandum to President Kovind, only representatives of five parties have been grated audience by Rashtrapati Bhavan, citing Covid-related restrictions. Mr Yechury said, “We have given a memorandum to the President. We are asking to repeal agriculture laws and electricity amendment bill that were passed in an anti-democratic manner without proper discussions and consultations.” The NCP leader said various political parties ahve requeted the President that these farm Bills should be repealed as they were not discussed with either stakeholders or in the Select Committee of Parliament. Mr Pawar referred to the agitation being held in the cold as the farmers had come out on the streets to protest peacefully and express their unhappiness, saying “it is the duty of the Government to resolve this issue.” He regretted that despite a request from all Opposition parties for an in-depth discussion of the farm bills and sending to a select committee,” but unfortunately, no suggestion was accepted and the Bills were passed in a hurry.”