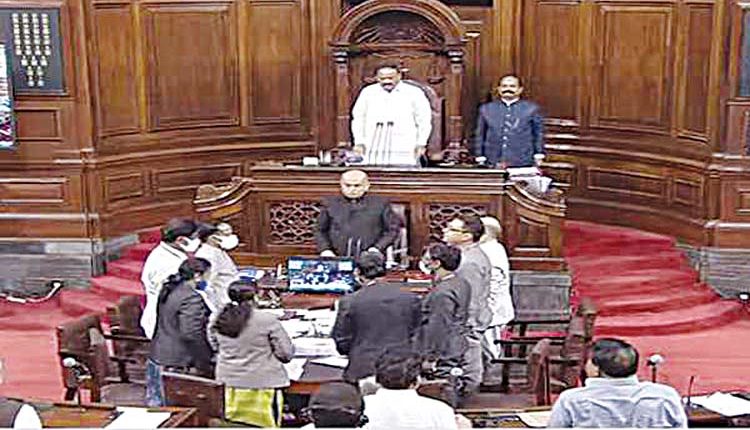 New Delhi, Aug 8 (Bureau) As the House bid an emotional farewell to him, Rajya Sabha Chairman M. Venkaiah Naidu in his last message on Monday urged MPs to maintain decency, dignity and decorum so the “image and respect of the House is maintained.” He said that since people are watching the Parliamentary proceedings, he has to take the tough decision of naming some members otherwise he has no ill-will against anybody or any party. Speaking in the end during ‘Farewell to Hon’ble Chairman’, Naidu said, “In a parliamentary democracy… We being the upper house have a greater responsibility. The entire world is watching India. I only appeal to the members of Rajya Sabha to maintain decency, dignity and decorum. So that the image of the House, and the respect is maintained and people remain receptive to show us, to hear us, and follow our advice.”

“This is my advice to all of you. As I told you, the students, the rural people, the ordinary people will be watching the parliamentary proceedings. That’s why sometimes I have to intervene and sometimes I have to take not a very happy decision of naming some people. Otherwise there is no enjoyment in taking such extreme action. I have no ill-will against anybody or any party,” Naidu added. Naidu said that people (members) always ask him not to pass the Bill in the din. But further solution is that do not create din, and do not pass the Bill in the the din, he said. “The respect is declining everywhere because the value system is declining. Keep that in mind. Try to do your bit while committing yourself to your ideological line. But see to it that that democratic principles set by our great people are followed,” he said. “We are not enemies, we are rivals. We must work hard to outshine others, like in a competition. But not to run down others. This is my last advice to you. My wish is that Parliament functions well. There are many members very good at speaking when the opportunity comes,” he added. Naidu said that people want the House to discuss the debate and decide, means three ‘D’, they don’t want the other ‘D’ means disrupt, he lightly said in his trademark style.

Naidu also adviced to media to give due coverage when the House functions constructively. “In media also, they don’t report of you speak constructively. If you speak obstructively, do something unusual, it is getting coverage. It’s a weakness of the media and media should get out of it at the earliest without trying to give some reasons here and there,” he said. The Chairman also recalled the time when the Prime Minister informed him that he was being chosen for Vice President. “The day when I decided to be the Vice President of India, with a heavy heart, I announced then and there, when the Prime Minister told me that I am being selected, I was in tears. I didn’t ask for this. But I was the disciplined soldier of the party, the party had given the mandate, I obliged it and I resigned from the party. There were tears not because of shirking the responsibility, but because I had to leave the party,” he said. Naidu said that India is the largest parliamentary democracy in the world. “We are very fortunate that our forefathers and the constitution makers and also the great freedom fighters have given their life and their best to the country and gave us a great constitution, and this Parliamentary democratic system.

Nobody has forced it on us. We have taken it ourselves,” he said. Naidu said that he did his best to maintain the dignity of the House and tried to accommodate all sides in the House. I might not have given them (members) enough time that they wanted but each one of you have been given time, whether it is Zero Hour, Question Hour, Special Mention or debate and discussion on the Bills, he added. Naidu also expressed his affection for the mother tongue saying the use of mother tongue needs to be encouraged. “I am happy that the President, the Prime Minister, the Chief Justice.. all are speaking about respecting mother tongue. Primacy should be given to mother tongue,” he said. I am thankful to the Prime Minister who has given me love and affection, the Chairman concluded while also extending thanks to other leaders including Leader of Opposition in the Rajya Sabha.