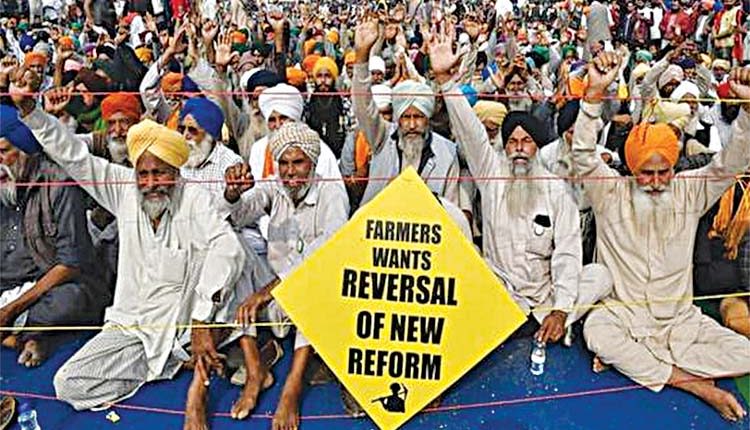 New Delhi, Dec 8 (FN Bureau) As the farmers’ protest against the new farm laws gained further momentum with more peasants reaching the National Capital, Delhi Police on Tuesday tightened the security. Additional Central Armed Police Force personnel have been roped in to maintain law and order situation. More farmers from the northern states especially Punjab, followed by Haryana, UP, Rajasthan and several other states reached Singhu, Kundli and Tikri border where their brothers have been sitting for the past 13 days and now waiting for the next round of talks with the Centre scheduled for Wednesday.

According to local sources from Punjab, more farmers and their supporters are likely to join the agitating farmers at the Singhu borders on Wednesday while the talks take place between their leaders and the central government. A large numbers of farmers were seen heading towards Delhi from far fetched areas of Punjab on tractor trolleys, trucks, SUVs filled boarded with farmers that were on their way to Delhi on GT road. Singhu, Tikri, Kundli , Dhansa , Auchandi , Piao Manyari , Chila , Gazipur and other border points are closed from both sides, with the increasing farmers’ stir. Haryana Police and Uttar Pradesh Police has also stepped up security arrangements along with the border points in coordination with their counterparts in Delhi. Artistes from the Punjab film industry like Gurdas Mann, Dijit Dosanjh and sports personalities like boxer Vijender Singh also visited and met the farmers extending their support to the cause and supported them. Not only on roads, social media posts area also flooding in from people in support of the farmers. Meanwhile , the impact of the Bharat Bandh was seen in several other states also other than the northern states. The farmers have called for a chakka jaam in Punjab between 1100 hrs to 1500 hrs. Nineteen political parties, including Congress, NCP, Shiv Sena, CPI, CPI(M), CPI(ML), SP, BSP, AAP have joined the bandwagon and extended support to the bandh call. AAP leader and Delhi Chief Minister Arvind Kejriwal had yesterday visited the protesting farmers and announced his support.

AAP leaders alleged that Mr Kejriwal had been put under house arrest after his visit on Monday. Police, however, rubbished the allegation.
Even though farmers were peaceful in their protest, political activists in many states turned violent, blocked railway tracks, roads and resorted to stone pelting. Congress and BJP activists clashed in Jaipur while in Patna political activists disrupted vehicular traffic and damaged private vehicles. On GT—Karnal road at Singhu border on the outskirts of the national capital, thousands of protestors shouted slogans and disrupted traffic. On Delhi-NOIDA border Bharatiya Kisan Union (BKU) activists blocked the main road.