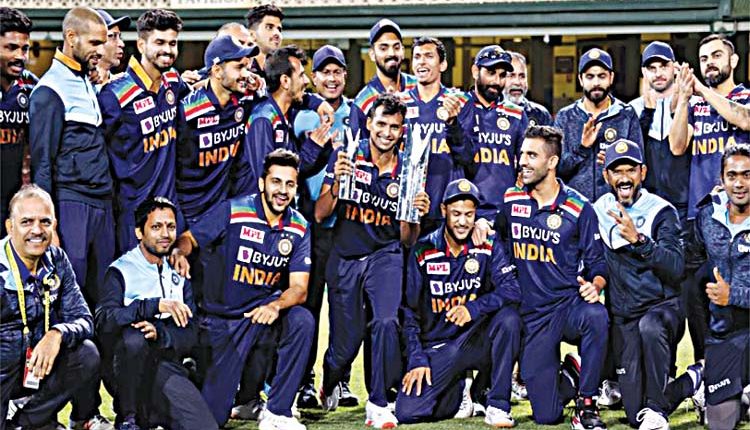 Sydney, Dec 8 (FN Bureau) Australia defeated India by 12 runs in the third and final T20I to avoid a 3-0 whitewash against the visitors, at the Sydney Cricket Ground (SCG), here on Tuesday. Batting first, a 53-ball 80 from Matthew Wade and a well made fifty from Glenn Maxwell (54) powered Australia to 186/5 in 20 overs. For India, Washington Sundar (2/34) in 4 overs) and Thangarasu Natarajan (1/33) were among the wickets.

Virat Kohli was left frustrated after a review taken by India during the third Twenty20 International against Australia in Sydney was declared “null and void” by the third umpire as the review had been taken by India after replays were shown on the big screen at the Sydney Cricket Ground. The incident happened in the 11th over of the Australian inning when a delivery from T. Natarajan hit Matthew Wade on the pads and India’s half-hearted appeal for leg before was turned down by the on-field umpire. Virat Kohli took a review and the third umpire went through with the process for a while before stopping to declare the review null and void as replays had already been shown on the big screen before India asked for the DRS review. In reply, Virat Kohli (85) led India’s chase and played a terrific knock of 85 runs (61 balls) but failed to take India over the line as wickets kept on falling from the other end. India finished with 174/7 in 20 overs, losing the match by 12 runs. With this win, Australia gain a consolation win.