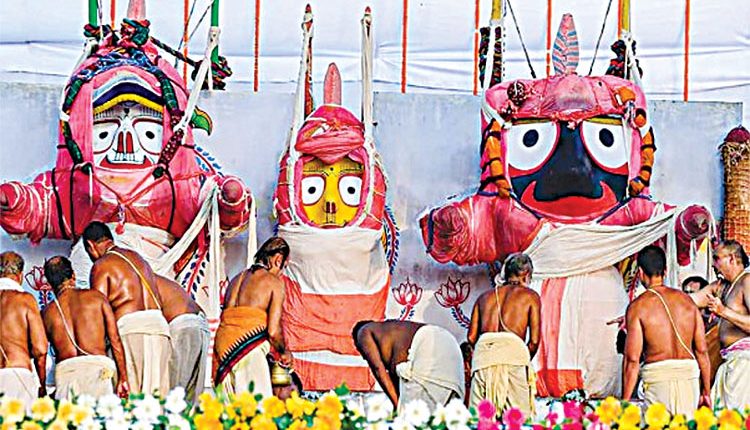 Puri, Jun 24 (FN Representative) Amid tight security and strict covid-19 protocols, Snan purnima, an important ritual prelude to annual Rath Yatra of lord Jagannath and his siblings was observed in Sri Jagannath temple without presence of devotees. This annual ritual is observed on the Jyestha full moon day as per the temple almanac. On the early morning of Thursday after Mangalarpan at about 1 am Daita servitors began Pahandi procession of lord Jagannath his elder Balabhadra and sister debi Subhadra and escorted them from Ratnasimhasan of the sanctum sanctorom to SnanVedi (bathing altar) and placed on it. The Pahandi was over by 4 am.

Priests performed the day’s nittees begining with Mangalarati followed by Mailum, Tadaplagi, Abakash, Suryapuja and Rosahoma. All these were over by 7.30 am. Thereafter, three set of servitors bathed the deities using consecrated 108 pitchers of aromatic water drawn from a reserved well. This was completed at 9.45 AM. The servitors then dressed the deities in new clothes. Chherapahanra was performed by a servitor entrusted by the Gajapati who prefered to abstain from rendering the service due to covid-19 pandemic situation. Chherapahanra was over by 10.30AM. The priests again perform a complex set of nitees on the altar.Soon after three set of servitors dressed the deities in elephant attire popularly called “Hati vesh”.

This vesha marks visit of Maharashtrian Ganapati Bhatt an ardent devotee of lord Ganesh. Legends say when Ganapati Bhatt got frustrated as he could not see lord Ganesh in Sanctum sanctorum and was about to return lord came in his dream and asked him to have his desired darshan on snan vedi on full moon day. After witnessing Hati vesh which resemble with image of lord Ganesh ,Ganapati Bhatt was stupefied the legends say. It took about one month to a dozen sadhus of Raghabdas and Gopal tirth mutts to prepare the elephant attires using solapith and other colours. Later in the evening the Hati vesh would be unmade and deities were conducted in Pahandi to the Anasarghar (temporary room for sick) where the Triniry would stay in bed supposedly suffering from fever after the grand bath. During these days temple Vaidya(physician) would administer herbal drugs and keep the deities on fruit diet.

Since none other than Daita servitors were allowed to go into sick room, a painted image of deities called” Pattidian”would be displayed at the Anasarghar door. The cooked bhog during the anasar period would be offered to these images. The administration has taken adequate steps to ensure devotees do not come near the Simhadwar. All the city roads connecting to Badadanda were sealed while section 144 CrPc was clamped around the Sri Jagannath temple. About five hundred servitors those tested Covid negative were allowed to participate in the ritual. Dr.Krishan Kumar the chief administrator of the temple, collector Samarth Verma and K.Vishalsingh SP and DIG Jaswant Jethwa were present.

Quality time in road construction projects should be maintained