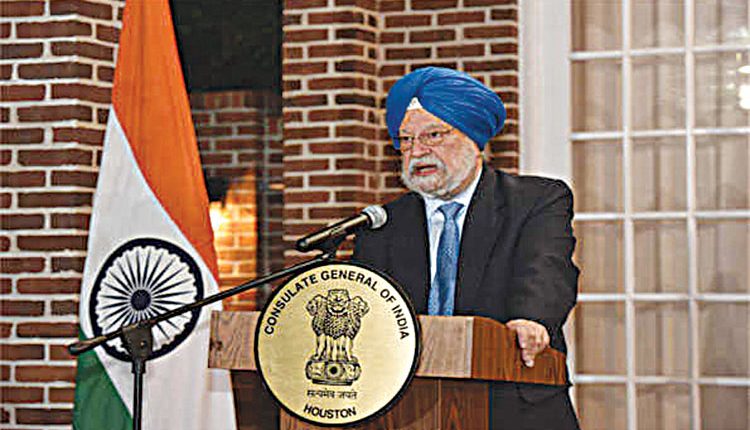 New Delhi, Oct 12 (Representative) India’s energy strategy is mindful of commitments to global commons and green transition and to ensure energy availability, affordability and security to all, Union Petroleum and Natural Gas Minister Hardeep Singh Puri said on Wednesday. Addressing a roundtable on “Opportunities in the India-US Strategic Partnership” at Houston, he said 25 per cent of global energy demand growth in the next two decades is going to emanate out of India.He said India had taken many steps towards low carbon development, including through emerging fuels like hydrogen and bio-fuels. He emphasised that despite the current challenging energy environment, India’s commitment to energy transitions and its climate mitigation goals, is not going to diminish.

The Minister said India was undertaking major reforms to rationalize and incentivise exploration and production by reducing the no-go areas by 99 per cent opening up approximately 1 million sq km, making good quality geological data available through the National Depository Registry. In a series of tweets, Puri said the immense potential between the two countries in areas of biofuels, gas based economy, green hydrogen, petrochemicals and upstream sectors is evident and is being furthered by collaboration by the private sector companies.“Due to reform measures by the Modi government, there is unprecedented interest in Indian E&P by global oil companies,” he said.

As a gesture of commitment of the Indian government to exploration and production sector, the special Coal-bed Methane (CBM) round and offshore bid rounds in the oil and gas capital of the world (Houston) offering over 2.3 sq lakh km, after opening up over 1 million sq km of No Go areas recently, was launched by the Minister, an official statement said. Puri chaired the roundtable organized by US-India Strategic Partnership Forum. The roundtable brought together over 60 participants from 35 companies including senior leadership of energy majors. Indian Energy PSUs also attended the event. The discussion was concluded with broad-based support from the participants to push forth with potential partnerships which will bring the best-in-class technologies in both traditional energies and new energies to India.