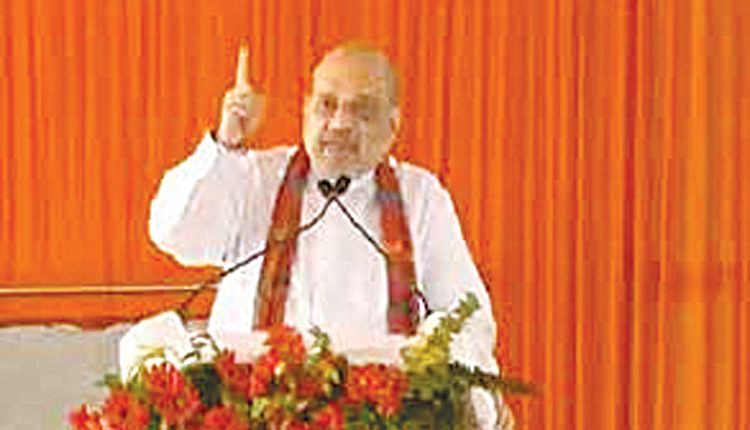 New Delhi, Oct (FN Agency) Union Home Minister Amit Shah on Tuesday said that Narendra Modi government was following path and principles of great leader Jai Prakash Narayan while hisdisciples in Bihar deviated from the goal set by him and jumped into lap of Congress for thesake of power, a reference to Chief Minister Nitish Kumar who joined hands with Congressand RJD, to lead Grand Alliance government in the state.Shah, also former president of BJP while addressing a function organised at Sitab Diara in Saran district of Bihar, the birth place of Jai Prakash Narayan popularly known as JP, to mark his 121stbirth anniversary, said that JP had launched total revolution in mid seventies to overthrow the then dictatorial Congress government at the Centre.

Under his leadership, students’ movement was launched in Gujarat in 1973 which led to ouster of corrupt Congress from there, he added. “After Gujarat, JP had launched students movement in Bihar and heavy presence of people in his rally at historic Gandhi Maidan in Patna had made restless, the then Prime Minister Indira Gandhi”, Union Minister said adding that the then Congress government at the Centre had imposed emergency and sent JP to jail. Senior leaders like Lal Krishna Advani and Atal Bihari Vajpayee were also lodged in jail, he added.Shah said that JP’s movement ultimately led to ouster of dictatorial Indira Gandhi government from the power and non Congress government was formed at the Centre for the first time. JP was a selfless leader fully committed to the cause of people who had shown how change in regime could be made in larger public interest, he added.

Union Minister said that several leaders including Chief Minister Nitish Kumar were product of JP movement.It was painful that they had now joined hands with Congress to enjoy power, he stated while making reference to Chief Minister Kumar who walked away from NDA on August 9 and joined hands with Grand Alliance having Congress as its constituent while RJD, party of another product of JP movement Lalu Prasad having relation with Congress since long.Shah also called upon the people to judge themselves whether they would like to extend theirsupport to BJP which was strongly committed to principles of JP or those who trampled hisprinciples for the sake of power. Narendra Modi government was strictly following the principles of JP had had launched several schemes for welfare of poor and deprived, he added.