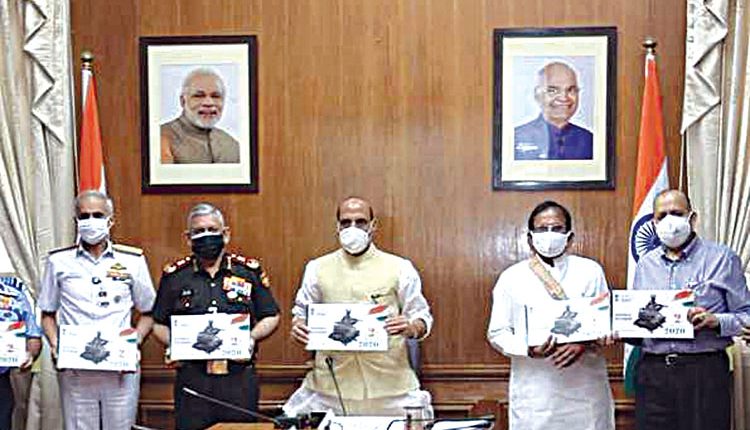 New Delhi, Jun 8 (FN Bureau) India exported defence products worth Rs 9,116 crore in 2019-20 — a substantial rise from Rs 1,941 in 2014-15. The government attributes the upward turn in exports to increased partnership with the private sector and expanded shipment to 84 countries. This is stated in an E-booklet titled ’20 Reforms in 2020’ Defence Minister Rajnath Singh released on Monday.

The EBook highlights the major reforms undertaken by the ministry in 2020 to bring about greater cohesion and modernisation of the Armed Forces through policy changes, innovation and digital transformation. Reforms also focused on the ‘AatmaNirbhar Bharat’ initiative of Prime Minister Narendra Modi; increased collaboration with the industry to boost defence exports; measures to accelerate defence acquisitions with greater transparency; digital transformation; strengthening of border infrastructure, it says. “The increased partnership with the private sector has led to a substantial rise in defence exports. The value of total defence exports rose from Rs 1,941 crore in 2014-15 to Rs 9,116 crore in 2019-20.”

Also, for the first time, India figured in the list of defence equipment exporting nations, as the exports expanded to more than 84 countries. Singh termed the E-booklet as an important document on the bright future of the defence sector in the country. “The booklet is a reflection of the resolve of the Government, under the able leadership of Prime Minister Shri Narendra Modi, to make the defence sectorstronger and more efficient,” he said. He expressed confidence that the reforms undertaken by MoD will make India a global powerhouse in the defence sector in the times to come.

Banks not to destroy CCTV recordings of demonetisation period

Govt hikes MSP of Paddy by Rs 72 per quintal