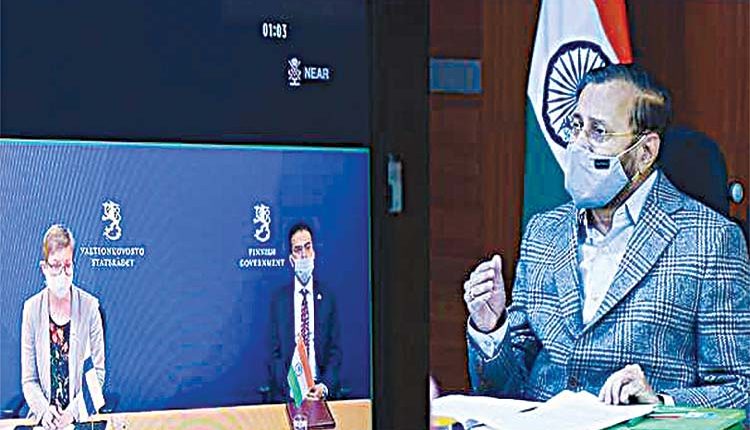 New Delhi, Nov 26 (Agency) India and Finland on Thursday signed a MoU for developing cooperation between two countries in the field of Environment protection and biodiversity conservation. The MoU is a platform to further advance Indian and Finnish partnership and support, exchange best practices in areas like prevention of air and water pollution; waste management; promotion of circular economy, low-carbon solutions and sustainable management of natural resources including forests; climate change; conservation of marine and coastal resources; etc.

The MoU was signed virtually by Union Minister of Environment, Forest and Climate Change Prakash Javadekar from the Indian side and Ms Krista Mikkonen, Minister of the Environment and Climate Change, Government of Finland from the Finnish side, the Ministry of Environment, Forest and Climate Change said in a statement here. At the event, Mr Javadekar said that the MoU also provides the possibility to have joint projects in areas of mutual interest. ‘This MoU will definitely commits us to work together more closely towards on the fulfilment of commitments made under Paris Agreement,’ he said. Mr Javadekar also informed that India has achieved its voluntary target of reducing emissions intensity of its GDP by 21 per cent over 2005 levels, by 2020 and is poised to achieve 35 per cent reduction well before the target year of 2030. As part of its Nationally Determined Contributions submitted under the Paris Agreement, India has taken three quantitative climate change goals viz reduction in the emissions intensity of Gross Domestic Product by 33 to 35 percent by 2030 from 2005 level, achieving about 40 percent cumulative electric power installed capacity from non-fossil fuel based energy resources by 2030 and creating an additional carbon sink of 2.5 to 3 billion tonnes of carbon dioxide equivalent through additional forest and tree cover by 2030. The MoU will strengthen technological, scientific and management capabilities and develop bilateral cooperation in the field of environmental protection and biodiversity conservation on the basis of equality, reciprocity and mutual benefit with due respect to promotion of sustainable development.