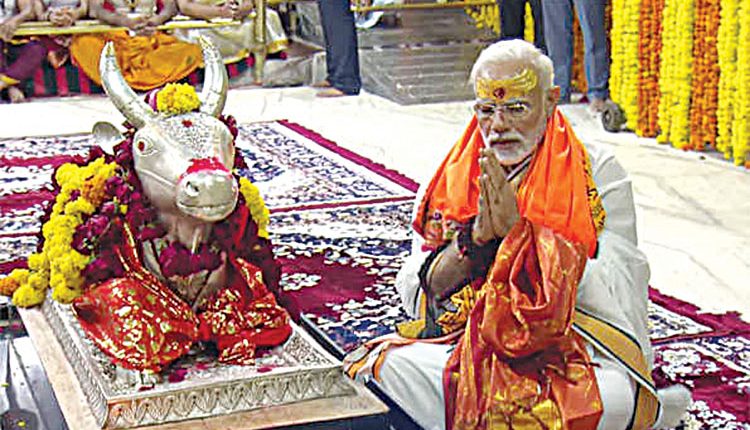 New Delhi, Oct 11 (FN Representative) Prime Minister Narendra Modi underlined on Tuesday that India is advancing towards self-reliance in the defence sector and indeed every other sphere of endeavour is also witnessing betterment. Addressing a mammoth gathering at the Kartik Mela Ground in this ancient holy city where he dedicated the Shri Mahakal Lok’s maiden phase to the nation, the visiting dignitary emphasised on reviving the country’s spiritual, cultural and Puranic heritage.

“A nation’s cultural splendour achieves colossal form only when the banner of its success flutters at a global level; for attaining the pinnacle of triumph it is imperative that the motherland flourishes in the cultural arena. For more than one millennium; Ujjain has been spearheading India’s accomplishments, prosperity, knowledge, dignity, civilisation and literature. Shri Krishna was educated in Ujjain, which is associated with the grandeur of (Gupta era monarch) King Vikramaditya and is a city replete from the Puranic and religious viewpoint; in the centre of all this presides Lord Mahakal.

I came here in compliance with a summons from Mahakal and the emotion that suddenly deluged the conscious at that juncture is being witnessed in the form of creation right in front of my eyes. Lord Shiva is synonymous with knowledge therefore jyotirlinga development is imperative. Lord Mahakal’s city is protected from the onslaught of dissolution and is the centre of India’s soul as per astrological calculations. In the proximity of Lord Mahakal, everything is supernatural, extraordinary and incredible,” the Prime Minister said.

Businesseses must guard against cyber attacks