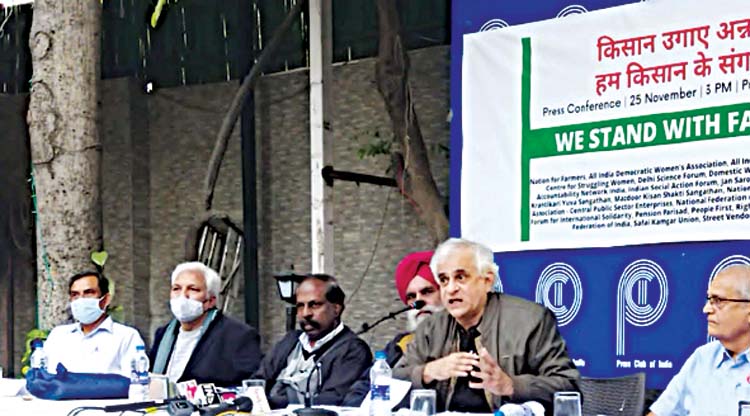 New Delhi, Nov 25 (FN Agency) A day before the farmers’ complete one year of agitation against three farm laws, the Nation for Farmers and other collaborating platforms on Thursday announced the formation of a “Kisan Commission,” which will look into the every aspect of agriculture and farmers’ issues from all over the country. “Today, we have announced the creation of Kisan Commission, which will assess and report on the state of agriculture in a holistic way,” agriculture expert P Sainath said here in a press conference. Farmers should form their own commission at the national level comprising farmers and farm labourers from every sector of farming. The Commission will study the issue and challenges of the farming sector and counter the government’s studies, even in the courts,” he said, adding that it will add a new energy among farmers. The idea is to create a robust vision and strategy of agrarian transformation with the active participation of farmer’s origination without being influenced by corporate capital,” he said.

Slamming the government for passing the three farm laws, he said all Parliamentary procedures were overlooked by the government while passing these laws which are illegal and undemocratic. He said “the agriculture is a state subject but before passing the laws, states were not consulted. They have consulted people only from the corporate world.” Speaking in the M S Swaminathan report, he said “It is 16 years since the Swaminathan Commission submitted the first of its five reports to the government but not a day was spent by parliament in discussing the important report on agriculture in this country’s independence history”. “Both UPA and NDA governments “colluded” to kill the report,” he alleged. Quoting the NSS report on farmer’s income, he said their income from crop cultivation has decreased in the real term. All India Kisan Sabha President Ashok Dhawale welcomed the move and said it’s a historic day for all of us to create the Kisan Commission a day before the completion of one year of agitation against the farm laws. “Last one year the farmers of India have faced all kinds of repressions the likes of which have never been seen on such a continuous scale in any agitation all over the country” he said. He also raised the issue of M S Swaminathan report and said all the successive governments have failed in implementing the report. “Had it been implemented in these last few years the situation of farmers would have been very different from what we have seen today,” he said.

An ‘intense’ Sushmita Sen promises another thrilling season of Aarya