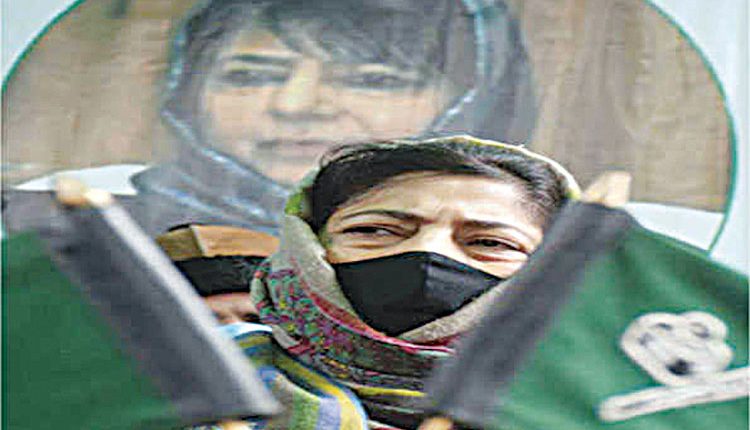 Srinagar, Dec 29 (Agency) Former chief minister and Peoples Democratic Party (PDP) president Mehbooba Mufti on Tuesday alleged that Bharatiya Janata Party (BJP) is using administration to blackmail newly elected District Development Council (DDC) members to shift loyalty.
“They (BJP) has been claiming again and again that it has restored democracy in J&K by holding DDC elections. But, whatever they are doing after the results of the elections were announced, it is a mockery of democracy. They are using local administration to blackmail newly elected DDC members from PDP, NC, Independents and other parties,” Ms Mehbooba told reporters on the sideline of a function held here on Tuesday to felicitate PDP leaders, who won DDC elections. She alleged that the DDC members from other parties and independents are offered money to change sides and join its (BJP’s) proxy parties in J&K. “If they don’t agree they are threatened that they will be linked to criminal cases. Unfortunately some police officers and civil administration officials are also involved in it… They (officials) facilitate this process. They pickup DDC members and lock them up in the offices of the proxy of BJP, where they are threatened and bribed,” Mr Mehbooba alleged.

Ms Mehbooba said after witnessing huge voter turnout in the elections, such actions are shameful. “It is ruining all the good which was done by holding elections in J&K. The PDP president said that the officials in the administration and police, who are refusing to do this, would be attached and transferred. “I have heard that they will be either attached or transferred,” she alleged. Ms Mehbooba alleged that despite court orders youth president of the PDP Waheed-ur-Rehman Para, detained by National Investigation Agency (NIA) in alleged terror case, was not allowed to take oath as DDC member on Monday. “Waheed was arrested to build pressure on me. People, who were arrested with six rifles, have been set free after they joined the proxy parties of BJP… there cases were withdrawn. But, Waheed was not allowed to take oath online despite a court order,” he said.