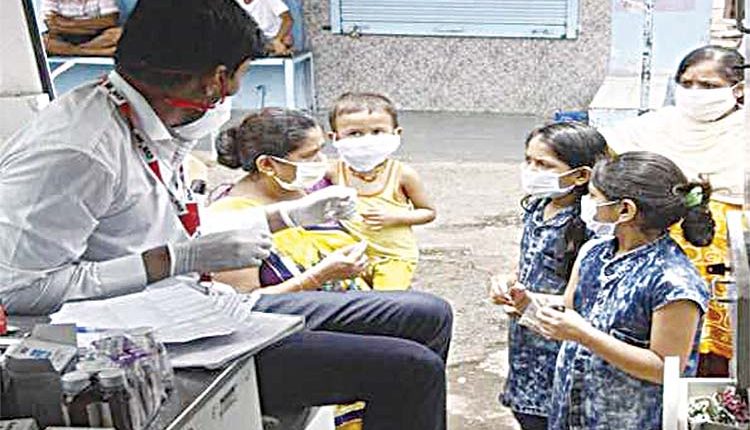 New Delhi, Dec 9 (Bureau) The ongoing contraction of India’s total active Covid-19 cases continued with the active caseload of the country totalling 3,78,909 and the share of active cases in the total positive cases further shrinking to 3.89 per cent. Daily recoveries exceeding daily new cases have ensured a total net reduction of the active caseload. A net decline of 4,957 cases has been recorded in the total active cases in past 24 hours. At less than four per cent of total cases, India’s active caseload of 3.78 lakh is showing a downward trajectory. India reported more daily recoveries than the daily new cases during the past 24 hours. While 32,080 people tested positive in the past 24 hours, there were 36,635 new recoveries during the same period. India’s total cumulative tests are nearing 15 crore — 14,98,36,767. More than one million tests are being conducted every day, 10,22,712 samples were tested in the past 24 hours. The testing capacity of the country has grown to 15 lakh tests a day. India’s testing infrastructure has seen a significant boost with 2,220 labs across the country. An average of more than 10 lakh tests conducted daily has ensured that the cumulative positivity rate is sustained at low levels.

The cumulative national Positivity Rate stood at 6.50 per cent today. The daily positivity rate is just 3.14 per cent. Higher volumes of testing eventually lead to low Positivity Rate. Nineteen states/UTs have weekly positivity rate more than the national average. Uttar Pradesh has the highest cumulative testing with more than two crore tests. Bihar, Tamil Nadu, Karnataka, Maharashtra and Andhra Pradesh are among the states with highest cumulative testing with more than one crore tests. The Recovery Rate has also increased to 94.66 per cent. Total Recoveries have surpassed 92,15,581. A huge 76.37 per cent of the new recovered cases are found concentrated in 10 states/UTs.

Maharashtra has reported the maximum number of single day recoveries with 6,365 newly-recovered cases, followed by Kerala and Delhi with 4,735 and 3,307 recoveries in the past 24 hours. Ten states and UTs account for 75.11 per cent of the new cases. Kerala continues to report the highest daily new cases at 5,032 followed by Maharashtra with 4,026 new cases. Of the 402 case fatalities reported in the past 24 hours, 10 states/UTs account for 76.37% of new deaths. Delhi saw the maximum casualties (57). Maharashtra and West Bengal follow with 53 and 49 daily deaths, respectively.

Snakebite leads to more than 1,20,000 deaths every year worldwide