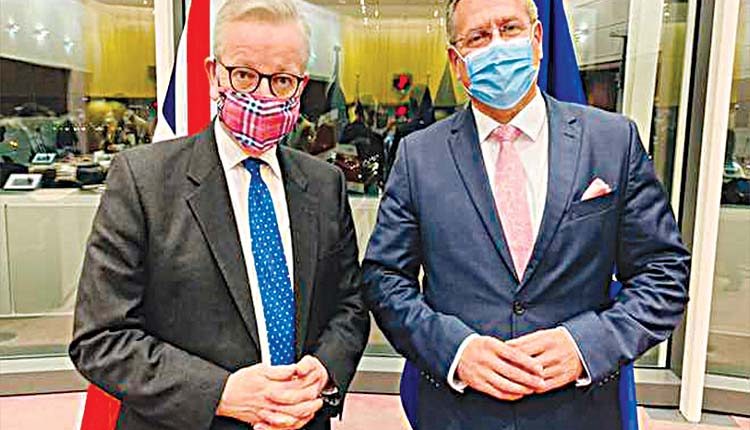 London, Dec 9 (Agency) UK Cabinet Minister, Michael Gove, said on Wednesday that the UK government’s decision to drop three clauses of its Internal Market Bill that threatened to overrule some parts of the Brexit withdrawal agreement and the so-called Northern Ireland Protocol, in particular, has created a “smoother glidepath” for an eventual post-Brexit trade deal between the United Kingdom and the European Union. “We’ve agreed that and, as a result, some of the measures we were putting forward – which some in Europe had criticised – we can now no longer need to introduce those and that means that there is a smoother glidepath to a possible deal,” Gove told Sky News broadcaster. The UK left the EU on January 31, but as part of the withdrawal agreement, both sides entered an 11-month transition period to negotiate their future commercial relations.

Trade talks have been at an impasse for months over wide divergences over fishing quotas, the level-playing field — the set of common rules and standards designed to prevent businesses in one country from undercutting their rivals in other countries — and governance. UK Prime Minister, Boris Johnson, is heading to Brussels on Wednesday for a face-to-face meeting with European Commission President, Ursula Von der Leyen, in a last-minute attempt to break the deadlock and sign a trade deal before December 31. The UK government’s decision to drop the controversial clauses from the Internal Market Bill could be seen as a gesture of goodwill by London, ahead of the meeting. Johnson had claimed that the Internal Market Bill, which proposed rolling back some of the commitments the UK made on state aid and customs checks on goods entering Northern Ireland, would ensure barrier-free trade between the UK’s four constituent nations in the event the current post-Brexit talks are unsuccessful. However, the EU saw the bill’s provisions as breaching the “good faith” of the withdrawal agreement as well as putting the Northern Ireland peace agreement at risk and threatened to take legal actions against the UK if the legislation was passed into law. The UK and the EU announced on Tuesday, however, that “following intensive and constructive work over the past weeks”, European Commission vice-president Maros Sefcovic and Gove, who are the co-chairs of the EU-UK Joint Committee, had reached an “agreement in principles.”

“Throughout this year there have been intense talks between ourselves and the European Commission in order to make sure we can resolve the issues on what’s called the Northern Ireland Protocol, Gove told the broadcaster. He explained that Northern Ireland’s position is different, because it is the only part of the UK with a land border with the European bloc, meaning that certain additional measures need to be put in place.