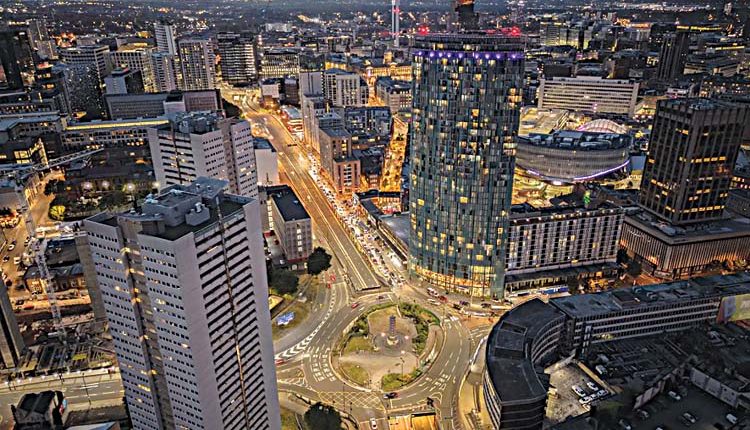 Building on the ongoing negotiations for a new Free Trade Agreement (FTA), a trade mission formed of business and political leaders from the UK’s West Midlands is announced to take place between 6th-12th November. The delegation, led by West Midlands Mayor Andy Street, will visit Chennai, Hyderabad, Mumbai, and Delhi to promote opportunities for bilateral trade and investment between India, the West Midlands, and the wider UK. The trade mission seeks to cement existing economic ties between India’s sub-regions and the West Midlands. Senior representatives will explore potential partnerships in areas including emerging digital technologies, low carbon mobility and data-driven healthcare, with the common objective of creating more prosperous communities in both the UK and in India. The West Midlands Growth Company (WMGC) and partners including the Foreign, Commonwealth & Development Office (FCDO), have organised a series of meetings and events which will bring together senior figures from leading Indian businesses. These include multinational manufacturer Tata Group, motorcycle manufacturer TVS, automotive manufacturing group Mahindra & Mahindra, low carbon transport manufacturer Switch Mobility, business service provider Firstsource and Air India. The UK delegation will visit a number of key industry hubs, including Hyderabad-based T-Hub and the Bombay Stock Exchange (BSE).

Alongside Mayor Andy Street, the delegation will be led by Councillor Ian Brookfield, Leader of Wolverhampton City Council and include senior representatives from the West Midlands Growth Company (WMGC); the Department for International Trade (DIT); the University of Birmingham; Warwick Manufacturing Group; Birmingham Airport; Birmingham City University; Bruntwood; Kagool; Birmingham Repertory Theatre, the Manufacturing Technology Centre and the British Kabaddi League. The delegation will be supported on the ground by Alan Gemmell, His Majesty’s Trade Commissioner for South Asia and the British Deputy High Commissioner for Western India; Alex Ellis, British High Commissioner; and Gareth Wynn Owen, Deputy High Commissioner in Hyderabad. With a ‘living bridge’ of nearly 200,000 ethnic Indians living and working in the region, the West Midlands and India already enjoy a strong relationship, rooted in a shared cultural heritage and strong economic links. India is the UK’s second largest source of investment in terms of number of projects, and the West Midlands represents a significant portion of Indian FDI into the UK, with 57% of Indian investment into the UK in 2020 located in the West Midlands. The region has already attracted some of India’s biggest companies, including Tata Motors, State Bank of India, Infosys, OLA, Enzen Global, Suprajit Group, Elder Pharmaceuticals, Microland, BSA, Switch Mobility and Firstsource.

Andy Street, Mayor of the West Midlands, said:
“As the UK seeks to deepen its relationship with India via a new Free Trade Agreement, we look forward to dovetailing with this national push by going out to India to ‘bang the drum’ for the West Midlands. It will be a fantastic opportunity to engage with the Indian business community to showcase just why the West Midlands is the ideal investment destination for their high growth companies.” “Across automotive, manufacturing and technology – helped by our world class R&D infrastructure, industrial ecosystem, and specialist talent base – there is tremendous potential for the West Midlands and India to collaborate even more closely to advance innovation for the benefit of both our societies and economies.”

Cllr Ian Brookfield, City of Wolverhampton Council Leader, said:
“The City of Wolverhampton and India have a long track record of collaboration, working closely together over the past decade to boost two-way investment, explore new opportunities around shared areas of strength and promote each other’s respective business interests. Indian-owned companies represent some of the largest businesses in Wolverhampton, from Jaguar Land Rover to Tata Steel, and our cultural ties run deep – most recently demonstrated through the launch of the British Kabaddi League in Wolverhampton. The West Midlands India Partnership is a bedrock on which this visit will build, as we seek to enhance our bilateral relations even further.”

Alan Gemmell, His Majesty’s Trade Commissioner for South Asia, said:
“Trade between the UK and India is already worth over £24bn, which supports nearly half a million jobs in each other’s economies – many of those in the West Midlands. I’m delighted that Mayor Andy Street is visiting India to deepen links with top Indian investors and to find more opportunities for great firms from the West Midlands to export to India, creating jobs and growth in both countries.” This trade mission has been organised as part of the Birmingham 2022 Commonwealth Games Business and Tourism Programme (BATP), which will build on the profile created by the Commonwealth Games to attract visitors, trade, events and investment into Birmingham, the West Midlands and the UK from nations and territories across the Commonwealth, including India. With an economy worth £105bn, the West Midlands region includes three thriving cities – Birmingham, Coventry and Wolverhampton, with Birmingham home to more international companies than any other major English city outside London. In 2019, the West Midlands generated an export value of £32 billion – the largest region by value outside of London and the South-East of the UK. BATP is sponsored by Airbnb, Dettol, Bruntwood, E.ON, Gowling WLG, University of Birmingham and Lendlease.

Indian investors in the West Midlands – case studies:
Tata Motors – India’s largest automobile company and owner of JLR
Tata Motors, India’s largest vehicle manufacturer, acquired British company Jaguar Land Rover in 2008. Headquartered in Coventry, UK, Jaguar Land Rover has firmly established the West Midlands as the engine of its operations, through a network of production units and research facilities. Jaguar Land Rover recently announced its new global strategy, Reimagine, a sustainability-rich reimagination of modern luxury, unique customer experiences, and positive societal impact. It marks the start of the company’s journey to become a net zero carbon business by 2039. Jaguar will be reimagined as an all-electric luxury brand from 2025 and Land Rover will welcome six pure electric variants over the next five years, as it continues to be the world leader in luxury SUVs. All Jaguar and Land Rover nameplates will be available in pure electric form by the end of the decade.

TVS Motors – acquired iconic British motorcycle brand Norton
January 2021 saw Indian manufacturer TVS Motors announce a multi-million investment to relocate the UK headquarters of subsidiary Norton Motorcycles to a new state-of-the-art facility in Solihull, West Midlands. The investment followed prior acquisition of the iconic British motorcycle marque by TVS Motors in April 2020. The premises will be the most advanced and modern plant for Norton in its 122-year history, and the central hub of the brand’s operations. Providing a permanent base for all staff, the new headquarters will be home to design, engineering, purchasing, sales, marketing, and support teams as well as the skilled production team that is resuming manufacture of motorcycles. The company’s decision was inspired by the region’s internationally renowned cluster of automotive expertise, which is responsible for a third of all production in the UK.

MicroLand – India’s leading digital IT transformation company
Microland opened a new state-of-the-art European Shared Services headquarters in Birmingham in 2020 to serve its growing client base across the continent. Headquartered in Bengaluru, India, the facility marked the company’s second investment in the region in two years. In 2018, Microland created a digital hub in Longbridge – also in Birmingham – that has since transitioned into a Customer Experience Centre. The company currently employs around 80 people in the region, with plans to accommodate up to 200 employees as part of potential further expansion. Microland’s ongoing success in the West Midlands, coupled with the opportunities arising out of the regions as an established centre for employment and innovation in the tech and digital sector, led the company to make further investments.

Infosys BPM – a global business process management subsidiary of Infosys Ltd
Infosys is focused on integrated end-to-end outsourcing and delivery of transformational benefits to its clients through reduced costs, ongoing productivity improvement, and process re-engineering. Whilst Headquartered in India, Infosys BPM operates across the globe and has recently set up a UK-based delivery centre in the heart of the West Midlands. The Rubery-based office employs roughly 150 UK employees and 45 Pune-based employees and has been instrumental in establishing a core footprint for Infosys BPM within the UK. The value-led ethos has allowed for the centre to contribute significant value to clients and ensure innovation and transformation is always a key priority. The Birmingham Delivery Centre is committed to developing and contributing significantly to the shared service networks across the UK by establishing close links with several shared service forums and bodies.