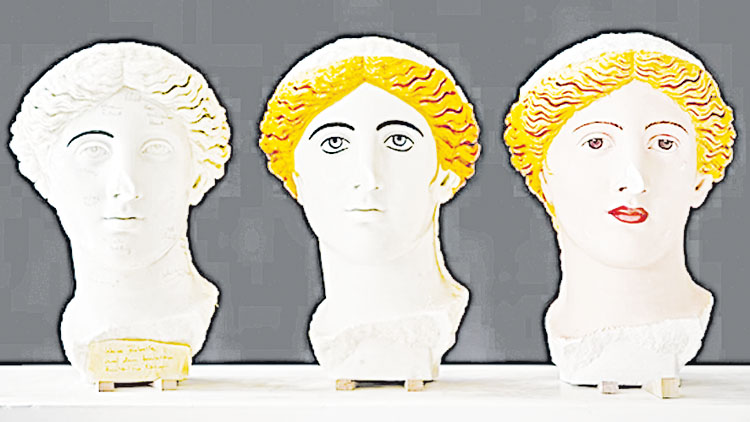 The myth that the statues of ancient Greece and Rome were white was created over time and upheld in part to serve racist ideological purposes. But recent exhibitions have shed new light on the colorful ancient world. In ancient times, when approaching the Temple of Aphaia on the Greek island of Aegina, one would have seen a sculpture of a young archer, painted in bright colors to look as lifelike as possible. “Run your eyes up towards the sky and take a look at the painted reliefs of the pediment,” reads a line about the temple from the play “Hypsipyle,” written by ancient Greek dramatist Euripides and performed around 410 B.C. Contemporary writings on art, including a book by Roman author Pliny the Elder, mention the fact that sculptures in ancient Greece were painted and not left with the white marble exposed. Yet many people today are surprised to learn that classical statues were bursting with color. So how and why did this myth of colorless marble statues begin? “This strange concept of colorless sculptures dates back to the Renaissance,” when form was emphasized over color, archaeologist Vinzenz Brinkmann said in an interview with DW in 2020. Renaissance artists thought statues from antiquity were bare marble and fashioned their works accordingly, thus helping to create the myth. Colorful items covered up The colors on most ancient statues had faded by the time they were initially excavated, so it was assumed they had always been colorless. But even as new knowledge emerged, the truth was intentionally withheld from the public to fit with the ideals of society, Brinkmann explained. For example, the statue “Laocoön and his Sons,” found in Rome in 1503, had colors that were “deliberately looked over,” said Brinkmann, adding that the color traces were often attributed to “barbarians.”

Brinkmann and his wife, archaeologist Ulrike Koch-Brinkmann, created the exhibition “Gods in Color,” which has been touring the world since 2003. It features over 100 sculpture replicas painted in bright hues based on ideas of what the originals might have looked like; modern technologies were used to detect traces of color. Brinkmann and his team also contributed to the ongoing exhibition at the Metropolitan Museum of Art in New York City “Chroma: Ancient Sculpture in Color,” which runs until late March 2023.White statues of the classical world also fit ideals of the 18th-century Enlightenment period, such as purity and clarity. The lack of color also reduced the sculptures’ sensuality and set them apart from the colorfully decorated artworks that characterized the Ottoman Empire. As a result, in the 18th and 19th centuries, even as large-scale excavations unearthed sculptures with traces of color on them, the colorful finds did not make it into the realm of public knowledge, despite the fact that these observations were often recorded. Fitting art into ideologiesSome of this myth of whiteness can be attributed to the 18th-century German art historian and archaeologist Johann Winckelmann, often considered the father of art history. According to an article in “The New Yorker” magazine, he supposedly said, “The whiter the body is, the more beautiful it is,” and, “Color contributes to beauty, but it is not beauty.” Winckelmann was an Enlightenment thinker, and the science-focused Enlightenment period gave rise to modern notions of racism.

White statues of antiquity fed into this too. “Historically, societies put their own ideologies into how they look at the world,” Nikos Stampolidis, general director of the Acropolis Museum, told DW in an interview. “Because most of these statues had lost their colors by the time they were excavated, and because the people of the time were admiring the simplicity of the white color of the marble, and it fit with their ideas of superiority of white people, which harmonized with their beliefs.” The excavation of Pompeii in the 18th century should have proven that painting statues in the ancient world was common practice. The city was destroyed by a volcanic eruption in 79 A.D., and as a result, many of the statues were preserved with some colors intact, such as a statue of the Greek goddess Artemis. However, according to information published on the “Gods in Color” website, “Unsuitable research methods and diverging understandings of ancient written sources … left room for interpretation and doubt” about whether the statues had been painted. One of the most famous examples of a statue on which traces of color were found is the “Peplos Kore,” currently in Athens’ Acropolis Museum. It was discovered during large-scale excavations of the Acropolis in Greece in the 19th century.

Dating back to the Archaic period about 530 B.C., and made of marble from the Greek island of Paros, the figure of a young woman had traces of orange coloring on her locks. Archaeologists saw the traces of paint and described them, but also immediately produced casts from which they made white plaster statues. They then sent these to world fairs, further leading the public to associate the ancient Greek statues with whiteness. Hitler and the white sculptureIn the 20th century, fascism appropriated the idea of white figures of antiquity as a symbol of white superiority. Both Benito Mussolini and Adolf Hitler particularly praised the art and architecture of ancient Greece and Rome, and the idea of white classical statues was useful in the conceptualization of racial superiority. For the Nazis, this meant aligning the visual image of the mythical Aryan race with Greek statues, for instance by featuring men with finely sculpted torsos. The wide-ranging colors used in ancient Greek statues are thought to have been related to various categorical concepts — an idea that the Acropolis Museum explored in its exhibition “Archaic Colors.” Blonde hair, typically featured on Greek Gods, warriors and athletes, symbolized power. A gray skin tone symbolized virtue and bravery, while the white skin of figures of young women “proclaimed grace and glow of youth,” according to the museum’s description.

Color in ancient Greek art was also often likely used to demarcate gender: Men were depicted as having darker skin tones, as they customarily worked outdoors, while women were often painted white, since the ideal was to stay indoors and out of the sun. More ‘authentic’ methods for color needed Exhibitions like “Gods in Color” and the current exhibition at the Metropolitan Museum of Art have helped millions to understand the myth surrounding classical white sculpture. Yet there is more to be done in the area when it comes to authenticity, as some, like Stampolidis, say the shows give a “false impression” of what colors looked like. “My opinion is that you have to have a statue made of marble, and on this material you should try to use either mineral or herbal colors as they were made in antiquity to get a more truthful impression of what it looked like back then,” he told DW. Stampolidis points out that each type of marble has a different crystalline composition: “Some are bigger, smaller, have more light, less light qualities. Cycladic marbles from Naxos, for example, and those from Thassos are not the same.” For Stampolidis, the ideal would be to experiment with original paint recipes on different types of marble. In the meantime, at least, the world is waking up to a new and colorful reality.

Amid winter, with increased smog and pollution, informed healthcare decisions can be life-savers for respiratory disease patients