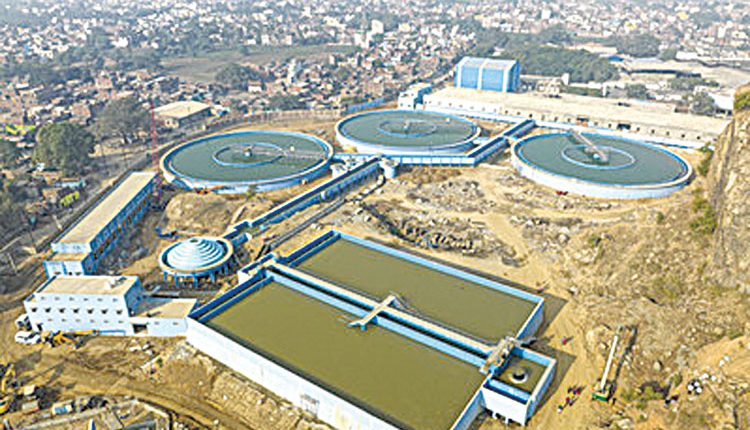 The hub of spiritual tourism Bodh Gaya, Gaya, and Rajgir, blessed by nature, are set to get clean, pure, and treated Ganga water for drinking. The initiative was taken by Chief Minister Shri Nitish Kumar to convert floodwater into drinking water for these areas, which had no access to Ganga water due to their geographical location.

An eagle-eye view of the Gangajal Aapurti Yojana
Water Resources Department (WRD) successfully implemented the CM’s dream project, ‘Har Ghar Gangajal,’ which will bring cheers to the faces of millions of residents, pilgrims, and tourists in Bihar. Along with the Chief Minister, thanks go out to Water Resources Department and Information & Public Relations Department (IPRD) Minister Sanjay Kumar Jha, who took up the initiative, and the engineering giant Megha Engineering & Infrastructures Ltd. (MEIL) for executing the project. Even though Ganga flows through this region, certain areas face severe drinking water problems year-long due to the non-availability of water. To overcome this problem, a uniquely conceptualised project in India was initiated, where the surplus river water during the monsoons would be stored in reservoirs, and later the potable water would be supplied to the people 365 days a year. The country’s first-of-its-kind Gangajal Aapurti Yojana, under the Jal Jeevan Hariyali mission, aims at storing floodwater received in the four monsoon months in huge reservoirs constructed. The stored water will be processed and made safe for human consumption before being supplied to the homes of people and tourists in the two cities. The project will be inaugurated in Rajgir by CM Shri Nitish Kumar on November 27, 2022, and in Gaya and Bodh Gaya on November 28, 2022.

The project’s first phase, which is now fully ready, is being commissioned in the three cities having mythological, historical, cultural, and religious significance. They have large tourist footfalls, resulting in a high demand for pure water. The project will meet this demand by supplying the stored water to Rajgir, Gaya and Bodh Gaya cities in the first phase. One might infer the significance of this project from the fact that a special Cabinet Meeting was convened at Bodh Gaya in December 2019, where the Hon’ble CM announced his resolve to bring Ganga water to these historic cities. Announcing the inauguration of this mega project by Chief Minister on 27 & 28 November, WRD minister, Shri Sanjay Kumar Jha, said, “The vision and foresight of CM and the steady resolve of his department has made it possible to execute this unique water management initiative in record time.” WRD Minister Shri Sanjay Kumar Jha frequently monitored the developments in the project, which has been completed in a record span of three years and is ready for handing over to the public.

Architecturally, the project is noteworthy, as an enormous natural reservoir was created, using the natural landscape without disturbing the local flora and fauna. The Ganga water will be lifted from Hathidah Ghat in Mokama, Patna, and supplied to the towns through a pipeline. MEIL completed works in a record time, despite challenges like COVID-19 and others. The project is ready to serve the people of Bihar. Hyderabad-based MEIL, which is executing the entire project, has created a massive infrastructure. Under the first phase, an Intake well-cum-pump house was built first at Hathidah in the Mokama area in Patna. From Hathidah, water is sent through a pipeline network to the detention tank built at Rajgir. A total of four pump houses have been constructed. They are at Hathidah, Rajgir, Tetar and Gaya. This project has three storage reservoirs with live capacity at Rajgir (9.915 M.Cu.M), Tetar (18.633 M.Cu.M), and Gaya (0.938 M.Cu.M). Water will be pumped from these reservoirs to three different Water Treatment Plants (WTPs) with varying capacities: Rajgir, with a capacity of 24 MLD; Manpur; and Gaya, with a capacity of 186.5 MLD. In addition, the company has erected two power substations of 132 KV/33 KV and 33 KV/11 KV capacities, laid a 151 km-long pipeline, built four bridges and a Rail Over Bridge. Presently, 5 MLD of water is being pumped as per PHED to Rajgir and 135 LPCD (litres per person (capita) per day) is being supplied for the population in Gaya and Bodh Gaya. More than 2,000 people relentlessly worked 24×7 to make Phase-1, a success. This resulted in significant job creation as well as a circular economy, from which many small-scale industries benefitted.

An Indian start-up is changing the way the world drinks