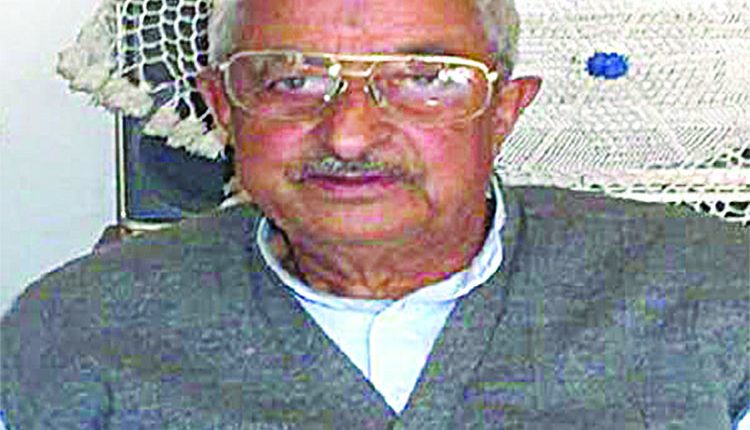 Srinagar, Nov 17 (Agency) Famous playwright Sajood Sailani died on Tuesday at his ancestral residence in the summer capital, Srinagar. Sailani, who was 85, passed away after remaining unwell for many years. The famous playwright, whose real name was Ghulam Mohammed Wani, was in the afternoon laid to rest at his ancestral graveyard in Pandrethan. Sailani was also a painter, theater artist and cartoonist. He in his career has written more than 150 radio plays, 27 full length stage dramas and 40 comedies in Urdu and Kashmiri languages. Born in a humble family in Dalgate in 1936, Sailani rose to prominence with his gift of writing, particularly drama scripts. He exhibited his talent for writing right from his teenager. It was during this era that he changed the name from Ghulam Mohammed Wani to Sajood Sailani and the name gave him immense recognition during the due course of time.

The dramas of Sailani, which were broadcast by Radio Kashmir, received wide appreciation from the people. His famous dramas include Kaej Raat (Dumb Night), Gaashe Taaruk (Guiding Star), Ropye Rood (Money shower). Sailani was instrumental in forming the Wani Art Gallery, which was visited by the famous artists of that time. However, due to lack of financial support from any quarter, the gallery couldn’t be sustained for long. The field in which Sailani succeeded immensely was theatre. He along with other like-minded persons revived the Theatre Federation, which after sometime was seen parallel to Jammu Kashmir Academy of Art Culture and Languages. In fact, at times it gave tough competition to Academy. He played an important role in popularising the modern Kashmiri theatre throughout 70s and 80s. His memorable works are Fundbaz (swindler), Vutri binyul (catastrophe), Zalur (spider), Tentykor (Catgut) and other dramas. In 1967, Sailani founded Sangam Theatre, which presented many of his plays including Rupayi Rood.