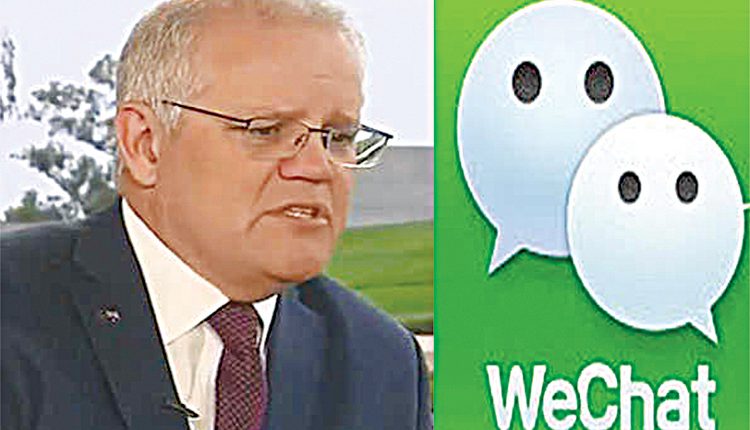 Moscow, Dec 3 (Agency) China’s WeChat social network has blocked a post by Australian Prime Minister Scott Morrison, in which he slammed a Chinese Foreign Ministry spokesman’s tweet about Australian soldiers’ war crimes in Afghanistan. In November, Australia released a report citing “credible evidence” that its elite servicemen took part in the extrajudicial killings of 39 civilians and prisoners while deployed in Afghanistan alongside the US-led coalition. On Monday, the Chinese ministry’s spokesman, Zhao Lijian, posted a tweet showing a computer-generated image of an Australian soldier cutting the throat of an Afghan child, saying that Beijing condemned such acts of violence. The publication triggered a backlash from Canberra, which demanded apologies from Beijing and asked Twitter to remove the post.

In an attempt to reach out to Chinese Australians, Morrison took to WeChat on Tuesday night. He stated that Australia is dealing with war crimes allegations “in a transparent and honest way,” “the way a free, democratic and enlightened nation should be.” He noted that the spat with Beijing over the doctored photo would not affect the attitude of the Chinese Australian community. “This post containing false images of Australian soldiers does not diminish the respect and appreciation for the Chinese community in Australia, nor does it diminish our friendship with the Chinese people,” he wrote. On Wednesday, his post was blocked. The Chinese social media platform’s message displayed in its place said that the censored post was “involving the use of words, pictures, videos” that would “incite, mislead, and violate objective facts, fabricating social hot topics, distorting historical events, and confusing the public,” the Australian broadcaster reported. Commenting on his post’s removal, Morrison said that he would leave it for WeChat to “make an explanation of their actions if they choose to make one.” He, however, said that Australia “remains committed to constructive and open and regular dialogue” with China to address the tensions. Over recent years, Chinese-Australian relations have been at a low over a spate of differences. In 2018, Canberra became the first country to ban Huawei from developing a 5G network. This year, relations have taken a new nosedive after Australia sided with calls for an international probe into the coronavirus pandemic’s origins. In late November, China slapped anti-dumping tariffs on Australian wine. Most recently, on Thursday, the Australian parliament passed legislation enabling the federal government to veto agreements struck by states with foreign countries, a move said to target Victoria’s Belt and Road deal with China.

Rohingyas from refugee camps in Cox’s Bazar taken to Chottogram

Marriage Date Prediction, one of the Biggest Research and Scientific Validations in Vedic Astrology