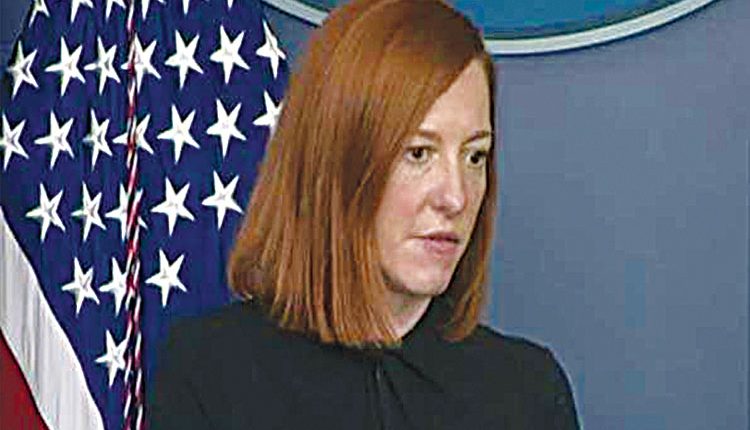 Washington, Feb 1 (FN Agency) The US has threatened to take action against those responsible for the detention of State Counsellor Aung San Suu Kyi, as well as President Win Myint in Myanmar. “The United States is alarmed by reports that the Burmese military has taken steps to undermine the country’s democratic transition, including the arrest of State Counselor Aung San Suu Kyi and other civilian officials in Burma [Myanmar].
President [Joe] Biden has been briefed by National Security Advisor Jake Sullivan,” White House Spokesperson Jen Psaki said in a statement. Earlier, western media reported that Aung San Suu Kyi, as well as President Win Myint, were detained along with other members of Myanmar’s ruling party in an early morning military raid on Monday. “We continue to affirm our strong support for Burma’s democratic institutions and, in coordination with our regional partners, urge the military and all other parties to adhere to democratic norms and the rule of law, and to release those detained today. The United States opposes any attempt to alter the outcome of recent elections or impede Myanmar’s democratic transition, and will take action against those responsible if these steps are not reversed,” Psaki said. The US State Department has also expressed concerns over the detention of multiple civilian government leaders in Myanmar.

“We call on Burmese military leaders to release all government officials and civil society leaders and respect the will of the people of Burma as expressed in democratic elections on November 8. The United States stands with the people of Burma in their aspirations for democracy, freedom, peace, and development. The military must reverse these actions immediately,” the State Department said in a statement. The Australian government has also issued a statement on Myanmar, saying that Australia is a long-standing supporter of Myanmar and its democratic transition. “We call on the military to respect the rule of law, to resolve disputes through lawful mechanisms and to release immediately all civilian leaders and others who have been detained unlawfully,” Australia’s foreign ministry said in a Monday statement.

According to media reports, Myanmar’s military announced a state of emergency on Monday morning, in a declaration signed by First Vice President U Myint Swe, who will now be serving as Myanmar’s acting president. According to the declaration, state power is being handed over to Commander-in-Chief of Defense Services Min Aung Hlaing. The announcement came after Myanmar’s government leaders and members of the ruling National League for Democracy party were detained. In January, Myanmar’s military raised the prospect of a coup d’etat after what they believed was widespread voter fraud during the November 8 election, which was the country’s second general election since the end of military rule in 2011.