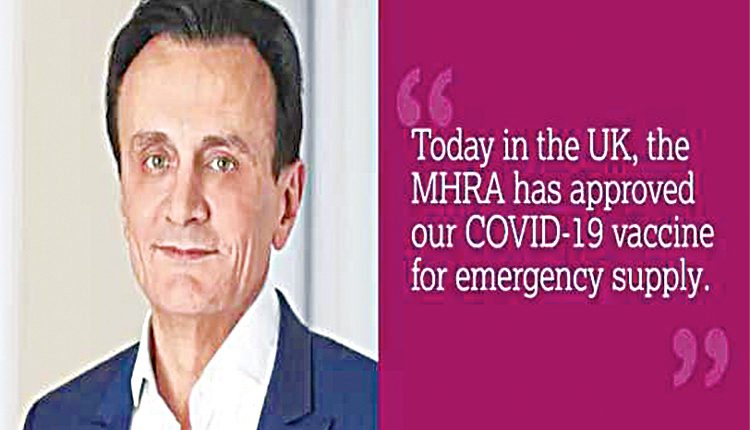 London, Dec 30 (FN Bureau) The United Kingdom on Wednesday approved a coronavirus vaccine developed by Oxford University and AstraZeneca, becoming the first country in the world to authorize the vaccine against the highly contagious virus. The Government has today accepted the recommendation from the Medicines and Healthcare products Regulatory Agency (MHRA) to authorise Oxford University/ AstraZeneca’s Covid-19 vaccine for use. This follows rigorous clinical trials and a thorough analysis of the data by experts at the MHRA, which has concluded that the vaccine has met its strict standards of safety, quality and effectiveness, the Department of Health and Social Care said in a statement.

The Joint Committee on Vaccination and Immunisation (JCVI) will also publish its latest advice for the priority groups to receive this vaccine, it added. BBC quoted Health Secretary Matt Hancock as saying that the rollout would start on 4 January. The UK has ordered 100 million doses from the manufacturer AstraZeneca – enough to vaccinate 50 million people. The JCVI has advised the priority should be to give as many people in at-risk groups their first dose, rather than providing the required two doses in as short a time as possible. Everyone will still receive their second dose and this will be within 12 weeks of their first. The second dose completes the course and is important for longer term protection. Earlier, UK had approved the Pfizer-BioNTech vaccine in December. According to a BBC report, more than 600,000 people in the UK have been vaccinated since Margaret Keenan became the first in the world to get that jab outside of a clinical trial. Now, the vaccination will be accelerated in the country as it is easy to mass produce and can be stored transported and handled at normal refrigerated conditions (two-eight degrees Celsius/ 36-46 degrees Fahrenheit) for at least six months and administered within existing healthcare settings.

The decision to approve the vaccine was taken under Regulation 174 of the Human Medicine Regulations 2012, which enables rapid emergency regulatory approvals to address significant public health issues such as a pandemic. This is the first authorisation for this vaccine, AstraZeneca said in a statement. “Today is an important day for millions of people in the UK who will get access to this new vaccine. It has been shown to be effective, well-tolerated, simple to administer and is supplied by AstraZeneca at no profit. We would like to thank our many colleagues at AstraZeneca, Oxford University, the UK government and the tens of thousands of clinical trial participants,” AstraZeneca’s Chief Executive Pascal Soriot said. It is also a good news for India, as The Serum Institute of India (SII) in Pune, the world’s largest vaccine producer by volume, had also sought emergency use authorization in the country for the Oxford University-AstraZeneca COVID-19 vaccine earlier this month. The Subject Expert Committee (SEC), a government panel of experts tasked with vetting coronavirus vaccines, has asked Serum Institute of India (SII) and Bharat Biotech International (BBIL) to submit updated country-specific trial data of their vaccine candidates. According to the Johns Hopkins University, United Kingdom has reported 2,389,963 COVID cases and 71,675 deaths till date. After the discovery of new strain in Britain, which is considered 70 per cent more transmissible than the previous strain, many countries, including India, have temporarily suspended flights from and to Britain.

Ukraine to spend $3.6mln on celebrations of 30th anniversary of independence