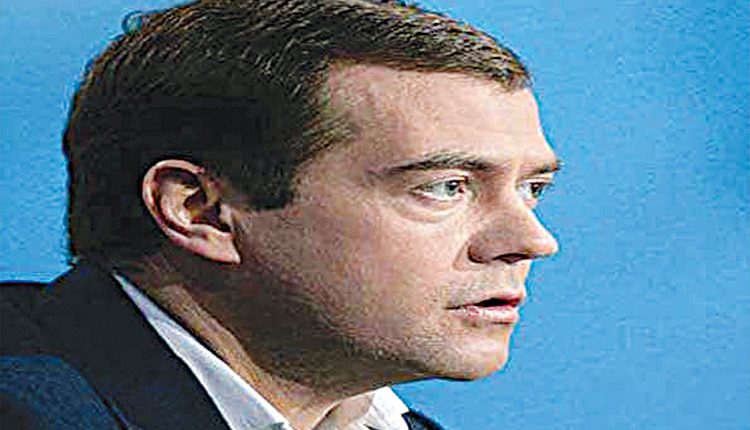 Moscow, Feb 1 (Agency) Russian Security Council Deputy Chairman Dmitry Medvedev qualified opposition figure Alexey Navalny as a “political crook” even as thousands of Russians joined the ongoing unauthorised protests to demand the release of the jailed leader. “I can tell you what I think about Navalny. First, I still consider Navalny to be a political crook, a person who uses shady methods to try to climb into power in order to accomplish his personal goals, and nothing more,” Medvedev said in an interview with Russian media. Navalny’s activities have now become “much more cynical and unbridled compared to what we saw just a few years ago,” Medvedev continued. As per a monitoring group, more than 5,000 people have been detained.

In Moscow police closed metro stations and blocked off the city centre. The opposition figure was arrested after arriving in Moscow from Germany, where he spent months recovering from the near-fatal incident. He blames the security services for the attack but the Kremlin denies this. Russian authorities say Mr Navalny was supposed to report to police regularly because of a suspended sentence for embezzlement. Mr Navalny has denounced his detention as “blatantly illegal”, saying the authorities had allowed him to travel to Berlin for treatment for the Novichok poisoning, which happened in Russia last August. Mr Navalny has blamed state security agents under Mr Putin’s orders for the attempt on his life and investigative journalists have named Russian FSB agents suspected of the poisoning. But the Kremlin denies involvement and disputes the conclusion, by Western weapons experts, that Novichok was used. Meanwhile, Russian President Vladimir Putin has denied reports he is the owner of a vast palace on the Black Sea, as alleged by Mr Navalny in a video that has gone viral in Russia and has been watched more than 100m times.