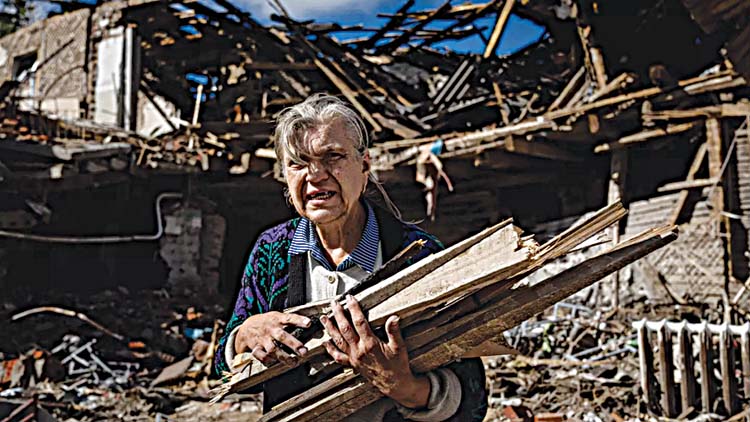 Geneva, Sep 24 (FN Agency) The United Nations has said its investigators have concluded that Russia committed war crimes in Ukraine, including bombings of civilian areas, numerous executions, torture and horrific sexual violence. The team of three independent experts on Friday presented their first oral update to the UN human rights council here, after it launched initial investigations looking at the areas of Kyiv, Chernihiv, Kharkiv and Sumy regions, adding that it would broaden its inquiries. Speaking a day before the seven-month anniversary of Russia’s invasion of its neighbour, Erik Mose, the head of the investigation team, told the council on Friday that based on the evidence gathered by the Commission of Inquiry on Ukraine, “it has concluded that war crimes have been committed in Ukraine”. The team of investigators visited 27 towns and settlements, as well as graves and detention and torture centres; interviewed more than 150 victims and witnesses; and met with advocacy groups and government officials, the Guardian reported.

Mose said the team had been especially “struck by the large number of executions in the areas that we visited”, and the frequent “visible signs of executions on bodies, such as hands tied behind backs, gunshot wounds to the head, and slit throats”. He added it was investigating such deaths in 16 towns and settlements, and had received credible allegations regarding many more cases that it would seek to document. The investigators had also received “consistent accounts of ill-treatment and torture, which were carried out during unlawful confinement”, the council was told. The UN has made the investigation of human rights violations in the war a priority and in May its top human rights body mandated a team of experts to begin work in the country.Since then, UN investigators, have risked their lives to collect evidence of crimes perpetrated against civilians, including in areas still threatened by enemy forces or laid with mines, the Guardian said.In the settlements of Bucha, Hostomel and Borodianka, occupied for about a month by Russian troops, Ukrainian investigators found dozens of mass graves where the bodies of civilians, tortured and murdered, had been buried, the team said.

Since the Russians withdrew from the area, a group of young volunteers worked tirelessly to exhume the bodies and send them to forensic doctors who have been collecting evidence of crimes perpetrated by Russian troops.Mose said the team had also “processed two incidents of ill-treatment against Russian Federation soldiers by Ukrainian forces”, adding that “while few in numbers, such cases continue to be the subject of our attention”, the Guardian report said.He said investigators had also documented cases of sexual and gender-based violence, in some cases establishing that Russian soldiers were the perpetrators.“There are examples of cases where relatives were forced to witness the crimes,” he said. “In the cases we have investigated, the age of victims of sexual and gendered-based violence ranged from four to 82 years.” The commission had documented a wide range of crimes against children, Mose added, including children who were “raped, tortured, and unlawfully confined”, the Guardian said.

Putin is not bluffing about nukes, says EU