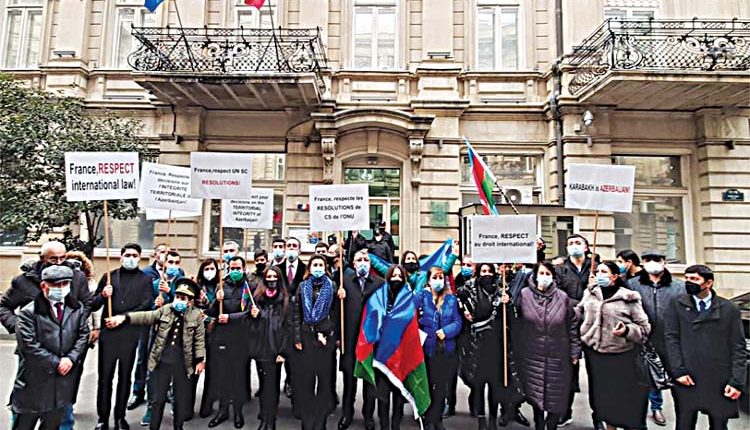 Baku, Nov 26 (Agency) A group of people has gathered in front of the French embassy in Azerbaijani’s capital of Baku to denounce the resolution on recognition of independence of the Nagorno-Karabakh region adopted by the French upper house, media reported on Thursday. The Senate lawmakers passed the resolution urging the country’s government to recognize the independence of the South Caucasus region disputed by Azerbaijan and Armenia on Wednesday in a 305-1 vote. The resolution is non-binding. The Azerbaijani government jointly with Turkey has condemned the resolution, calling it “an ordinary piece of paper.”

Media reported that over a dozen people organized the rally in front of the French diplomatic premise in Baku to protest against the French upper house resolution. Meanwhile, the Azerbaijani parliament has adopted a statement opposing the French document. The confrontation in Nagorno-Karabakh originally began in February 1988, when the Armenian-dominated region declared its secession from the Azerbaijan Soviet Socialist Republic. The latter lost control of the self-proclaimed republic and its adjacent areas in the 1992-1994 armed clashes. Since 1992, negotiations on peaceful resolution of the conflict were ongoing with the mediation of the Minsk Group, co-chaired by Russia, France, and the United States. Hostilities in the region have since erupted multiple times with the most recent flare-up beginning in September, when both parties accused each other of initiating the clashes. A ceasefire regime was introduced effective from November 10, after the leaders of Russia, Azerbaijan, and Armenia adopted of a joint statement on the cessation of armed hostilities in Nagorno-Karabakh on November.