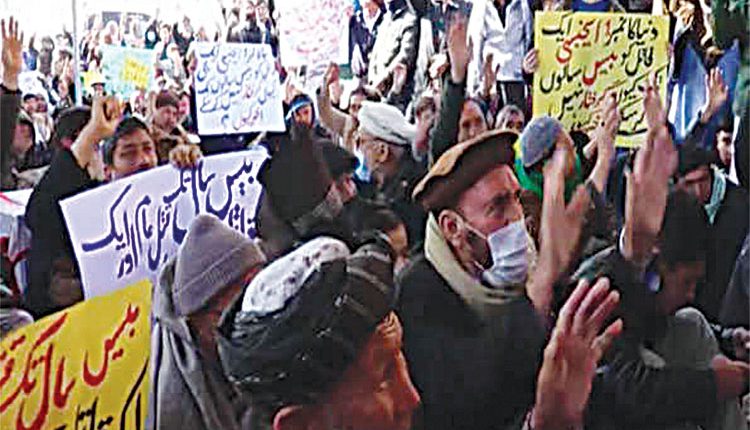 Islamabad, Jan 6 (Agency) The Hazara community continued their sit-in protest against the killing of Shia Hazara miners in the Mach area of Balochistan on Sunday, refusing to bury their deceased till Pakistan Prime Minister Imran Khan meets them. The agitation in support of the Hazara community also spread to other cities, including Karachi and Gilgit. Several roads in Karachi were blocked on Wednesday as protests continued and spilled over to different areas of the metropolis against the killing of Shia Hazara miners. The protesters also burnt tyres and wood, disrupting the traffic.

According to a police update, Wednesday’s protests, which were organised by the Majlis-i-Wahdat-i-Muslimeen (MWM), were happening at several places across the city, including Abbas Town, Abul Hasan Ispahani Road, Kamran Chowrangi at Gulistan-i-Jauhar, Power House Chowrangi in North Karachi, M. A. Jinnah Road, Sharea Faisal and Malir 15. One track of the Sharea Faisal was also closed for traffic, according to the update, the Dawn reported. On Tuesday, the Pakistan government had sent Interior Minister Sheikh Rashid Ahmed to Quetta, who held negotiations with the grieving community. However, the community refused to end the protest.

On Tuesday, the community had staged sit-ins in various parts of Karachi, including Abbas Town, Numaish, and outside the Karachi Press Club. During the protest, the community members urged the government to ensure their safety. On Sunday, armed attackers slit the throats of 11 miners in a residential compound near a mine site in Balochistan’s Mach coalfield area. The attackers also shot the massacre and circulated it through internet. Islamic State (IS) group claimed the responsibility. According to the news paper, hundreds of Hazara have been killed over the last decade in attacks, including bombings in schools and crowded markets and brazen ambushes of buses along roads. United Nation Secretary General António Guterres has condemned the attack.