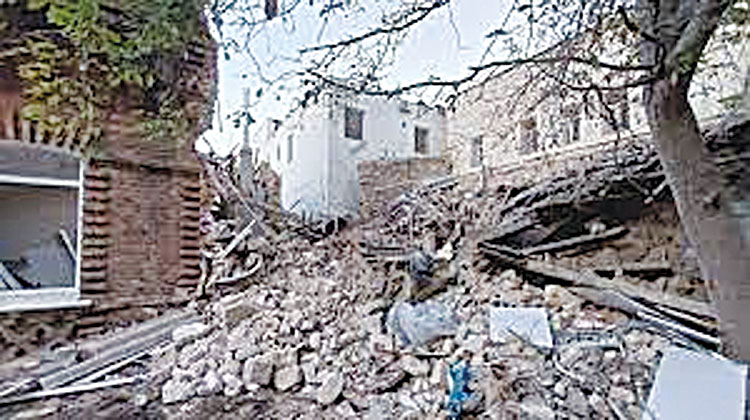 Kyiv, Oct 18 (FN Agency) Russian forces have again targeted Ukraine’s energy facilities, leaving part of Kyiv and other cities with no power and water. Explosions were heard in the capital shortly after 9 am and plumes of smoke billowed from around a power station near the Dnipro river, the BBC reported. Power and water were cut in Zhytomyr, west of Kyiv, and two facilities were badly damaged in Dnipro. The latest attacks came 24 hours after Kyiv was hit by “kamikaze” drones on Monday. The unmanned drones, believed to be Iranian-made, killed at least five people in the capital and four in the northern city of Sumy, and struck critical infrastructure, with power outages reported in hundreds of towns and villages. Russia has stepped up attacks in recent weeks on electricity infrastructure in cities away from the front lines. Officials have rushed to repair the damage, but the strikes, ahead of winter, have raised concerns about how the system will respond, the BBC said. “Ukraine is under fire by the occupiers.

They continue to do what they do best – terrorise and kill civilians,” said President Volodymyr Zelensky in response to the attacks. It was not initially clear to what extent drones were involved, although Kyrylo Tymoshenko, deputy head of the presidential office, said an S-300 anti-aircraft missile was fired at a residential building in the southern city of Mykolaiv overnight, killing one person. The city’s flower market was also destroyed. Early on Tuesday, the Zhytomyr mayor said there was no power or water in the city and hospitals were working on back-up power. Power and water supplies were also disrupted in the central city of Dnipro and officials appealed to residents to use power sparinglyShelling was reported in the north-eastern city of Kharkiv. Infrastructure in the southern city of Zaporizhzhia was also hit, although local officials said no-one had been hurt. In some cities, Ukrainians are buying power generators and gas burners, while across the country, people have been urged to reduce their energy consumption at peak times. Some towns are already facing rolling blackouts, the BBC report added. The latest attacks, by both missiles and drones, have brought renewed calls from the Ukrainian government for the delivery of air defence missiles.