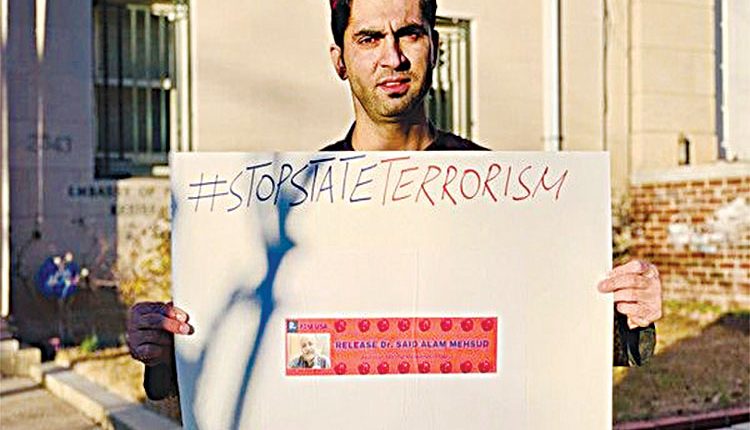 Washington, Jan 10 (Bureau): Dozens of activists rallied in front of the residence of the Ambassador to Pakistan in Washington, DC on Saturday afternoon against the arrest of lawmakers and leaders of a civil rights movement, campaigning for Pakistan’s ethnic Pashtun minority. Members of the Pashtun Tahafuz Movement (PTM) in the Washington Metro area called for the demonstrations after the authorities announced that Dr Said Alam Mehsud and Ali Wazir were being prosecuted on anti-state charges. The protestors rejected the accusation and demanded the immediate and unconditional release of the leaders.

Ali Wazir, a sitting Member of National Assembly (MNA, the Pakistani Parliament), and a senior leader of Pashtun Tahaffuz Movement (PTM) were arrested in the northwestern city of Peshawar on December 16 after a case was lodged against him in the port city of Karachi. He is accused of making anti-state comments during an unsanctioned rally in the city on December 6. While participating in a protest against the arrest of Wazir, Dr Said Alam Mehsud, another prominent Pashtun voice was arrested earlier this month.

Hewad Hemat, Coordinator PTM-Connecticut, USA said, “PTM is peaceful movement struggling for the recovery of missing persons and basic human rights for Pashtuns. Pashtuns are victims of terrorism and are not terrorists. We ask the intentional human rights organizations and groups to take notice of the arbitrary arrests of peaceful PTM leaders and activists and urge Pakistan to release PTM leaders Dr Said Alam Mehsud, Ali Wazir and others.” Nisar Hawayee, a member of PTM Washington, DC said, “If Pakistan wants to remain a state, they will have to behave or as we were reminded of what happened what they did exactly to the Bangla people. They didn’t want to leave Pakistan but were forced to and they did the right thing by separating from Pakistan.”

“They didn’t want to live under the brutal Pakistani regime. Anyone living under Pakistani rule and thinking that he is free is a fool. Pakistan must learn from history and stop the oppression of Pashtuns and other ethnic and religious minorities,” Hawayee added. Andrea Barron from TASSC (Torture Abolition and Survivors Support Coalition) while speaking to the protest said, “We are standing with all the minorities in Pakistan and if Pakistan is really an Islamic country and if they really believe in the Quran then Pakistan must stop the oppression of all minorities.”

Sufi Munawwar Laghari from Sindhi Foundation said, “We have to fight against Pakistan. That’s the only way. There is another way. We have to unite because they don’t learn from our one or two protests we are thinking of continuous protests and then maybe they will listen to us and if they still don’t listen the other surrounding embassies will listen and we will tell them to kick Pakistan out and declare Pakistan a terrorist country. There is no other option.” The PTM USA said that Pakistan has not only failed to bring the killers to justice but has tried to silence those who would ask for answers and accountability.

Pashtuns are now increasingly being convinced that the Pakistani army might be complicit in the attack and there is increasing evidence pointing to its complicity, said the PTM USA. The movement wrote in a tweet, “Pashtuns have been the target of violence and terrorism at the hands of both the Taliban and the Pakistani military for decades.”