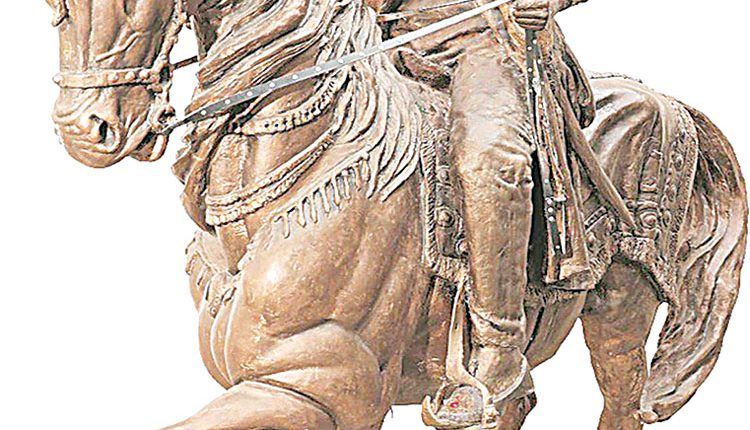 Lahore, Dec 13(Agency) One person has arrested on charges of vandalising the statue of Sikh leader Maharaja Ranjit Singh, located inside the Lahore Fort. Maharaja Ranjit Singh was the king of the Sikh empire which spread from Punjab state(I ndia)including Pakistan’s Punjab, parts of Sindh and some areas of Khyber Pakhtunkhwa. His statue was unveiled in the Lahore Fort at the Mai Jindan Haveli, on the emperor’s 180th death anniversary, by Sikh historian, writer and filmmaker Bobby Singh Bansal. Bansal’s London-based organisation the S.K. Foundation had funded the statue.

Bansal had hoped that the statue would help in forging among various communities of Punjab and that the statue had been donated to the people of Pakistan by his foundation to promote Sikh heritage and tourism here. The statue was unveiled in June 2019, however, not long after inauguration it was attacked, where two men struck it with wooden rods, resulting in the breakage of one of its arms and damage to other parts. The attackers were chanting slogans against the former ruler of the Punjab, and were protesting against the revocation of Article 370 in Jammu and Kashmir. In the latest attack, the young man who was later arrested, broke an arm of the statue made of cold bronze. Like those before him, the suspect, Zeeshan, also told the police that the Ranjit Singh’s statue should not have been built alleging that he had committed atrocities against Muslims. As per a report by Dawn the arrested teenager was influenced by the now deceased Khadim Hussain Rizvi, who had preached hate against the Sikh ruler.

More than 16 million nCoV cases in US