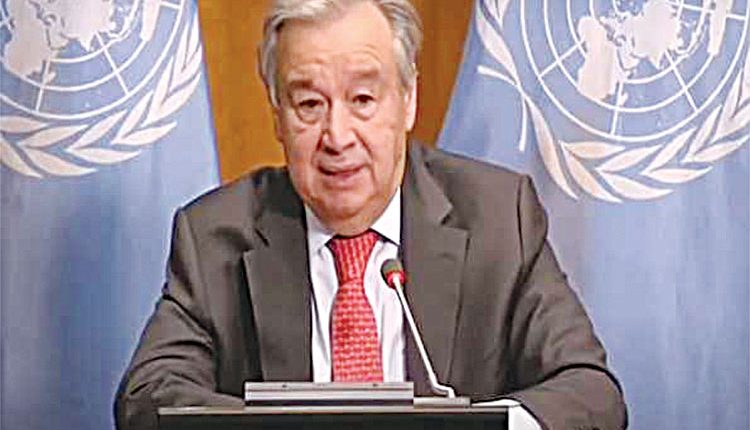 United Nations, Dec 13 (Agency) UN Secretary General Antonio Guterres addressed the 2020 Climate Ambition Summit, calling on leaders to declare “a State of Climate Emergency” until they achieve carbon neutrality necessary to save the Earth for future generations. On Saturday, the UN, the UK and France co-hosted the 2020 Ambition Summit marking the fifth anniversary of the Paris Agreement. The participants of the summit focused on actions aimed to tackle the climate change issue.

“Today, I call on all leaders worldwide to declare a State of Climate Emergency in their countries until carbon neutrality is reached,” Guterres said. The secretary general stressed that every country should take steps to save the Earth for future generations. “I urge everyone to show ambition, stop the assault on our planet – and do what we need to guarantee the future of our children and grandchildren,” Guterres said. According to the secretary general, countries do not adhere to the commitments provisioned by the Paris Agreement and this may result in “a catastrophic temperature rise of more than 3 degrees this century.” Guterres added that the international community might reach carbon neutrality, set out in the agreement, if global emission would be reduced “by 45 per cent by 2030 compared with 2010 levels.”
The secretary general noted that, to this end, countries should transform their economies, implement efficient technologies and “integrate the goal of carbon neutrality into all economic and fiscal policies and decisions.” The Paris Agreement is an international treaty on climate changed adopted by 196 states on December 12, 2015, which entered into force on November 4, 2016. The agreement was designed to keep the rise in global temperature to less than 2 degrees Celsius (3.6 degrees Fahrenheit) above pre-industrial levels.