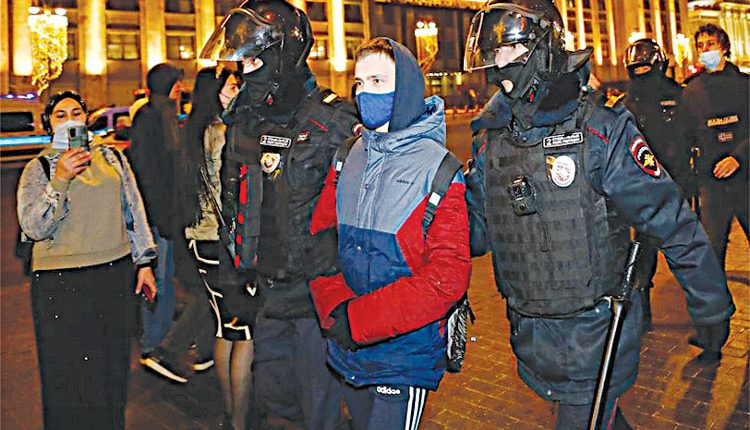 Moscow, Feb 3 (Agency) A Russian court jailed Kremlin critic Alexei Navalny on Tuesday, ignoring the West in a ruling the opposition politician blamed on President Vladimir Putin’s personal hatred and fear of him. The Moscow court handed Navalny a three-and-a-half-year sentence, but his lawyer said the anti-corruption blogger would actually serve two years and eight months in jail because of time already spent under house arrest. His lawyers said they would appeal. The decision, which followed nationwide protests calling for Navalny’s release, will further strain relations with the West, which is considering imposing sanctions on Russia over its handling of the case.

The United States, Britain, Germany and the EU urged Moscow to immediately free Navalny, with U.S. Secretary of State Antony Blinken saying Washington would coordinate closely with allies to hold Russia accountable. Russia is already under numerous Western sanctions however, and analysts say the West’s options for more pressure are limited. A Navalny ally had urged the West before the hearing to hit Putin’s inner circle with personal sanctions. Russia has suggested that Navalny is a CIA asset, a charge he rejects, and has told the West to stay out of its domestic affairs. Navalny, one of Putin’s most prominent critics, was arrested on Jan. 17 for alleged parole violations after returning from Germany where he had been recovering from being poisoned with a military-grade nerve agent. Navalny said Russian state security agents had put the poison in his underpants, something the Kremlin denied. He used Tuesday’s hearing to try to frame Putin’s place in history. “(Putin’s) only method is killing people. However much he pretends to be a great geo-politician, he’ll go down in history as a poisoner. There was Alexander the Liberator, Yaroslav the Wise, and Putin the Underwear Poisoner,” said Navalny.

His supporters, on hearing the ruling, encouraged people to gather in central Moscow though riot police had already taken up position. The Moscow metro shut down three central stations. Reuters reporters saw hundreds of protesters and the police detain some of them violently. Some of them chanted, “Putin is a thief!” and “Putin is a poisoner!” Outside the court earlier on Tuesday, Reuters reporters saw riot police detain around 70 of Navalny’s supporters. The OVD-Info monitoring group later reported 1,408 arrests nationwide, over 1,000 of those in Moscow. After his arrest, Navalny released a YouTube video making allegations about Putin’s wealth that was viewed over 100 million times. The Kremlin said it was false. Tuesday’s hearing focused on Navalny’s alleged parole violations over a suspended sentence in a 2014 embezzlement case Navalny says was trumped up.