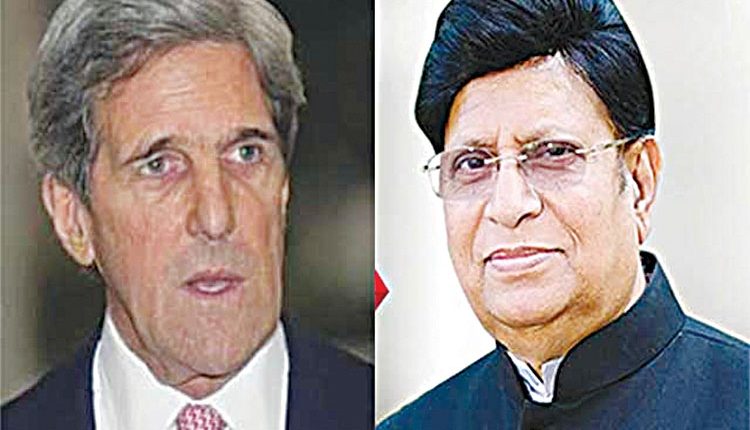 Dhaka, Jan 28 (Agency) US Special Presidential Envoy for Climate John Kerry called the Foreign Minister of Bangladesh Dr AK Abdul Momen on Tuesday to discuss the global issue of climate change and the possible US-Bangladesh collaboration regarding it, officials said here on Wednesday. The Bangladesh foreign minister talked about the time tested US-Bangladesh relations and expressed the satisfaction of the Government of Bangladesh regarding the appointment of Mr Kerry as the Presidential Envoy. He recollected the vital contribution of Mr Kerry towards the Paris Agreement on Climate Change and welcomed the decision of the US to return to the same.

He described all the actions taken by the Government of Bangladesh under the leadership of Prime Minister Sheikh Hasina on mitigation, adaptation and measures to strengthen their country’s resilience against climate change. He also briefed all the current and future actions of CVF and the GCA Dhaka office. Mr Kerry recognised the extraordinary challenges faced by Bangladesh due to climate change and frequent natural disasters. He mentioned that the next COP26 might be our last chance to hit the target and assured US’ firm engagement to achieve it. He conveyed his greetings to Prime Minister Sheikh Hasina and assured the continued support of the US for various sectors and issues including the Rohingya crisis. He agreed that international financial institutions could do more for the issue of climate change.

He also opined that many countries were not responsible enough when it came to adequate mitigation and adaptation issues and their part of the contribution. He also agreed with the foreign minister that the displacement of people due to climate change would be a vital security issue for everybody. He emphasised using the current opportunities to maximise the inclusion of as many people as possible. He also expressed his interest to be updated about the functions and priorities of the CVF and GCA. Both of them agreed to work closely at COP26 and other multilateral platforms.

Want protection for all from COVID-19