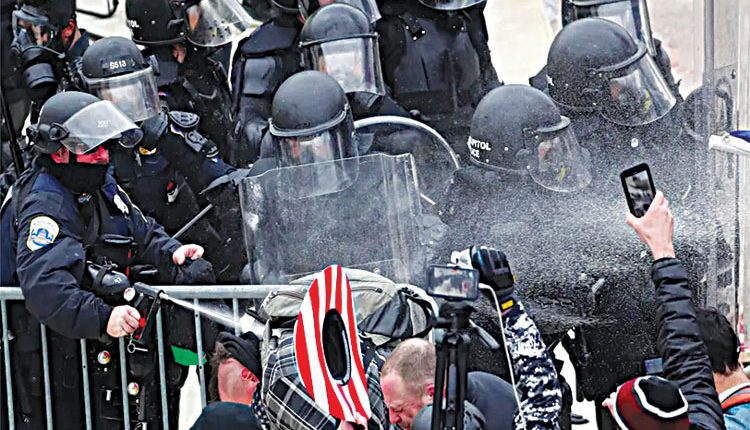 Washington, Jan 7 (Agency) At least four people died and 52 were arrested during a protest after US President Donald Trump supporters swarmed in the Capitol Hill building in the middle of a Congress session to stop what they alleged to be a “stolen election”. Metropolitan Police Department Robert Contee, the chief of the local police, said at a press conference that four people, including a woman, died and 52 others were arrested over the violence. According to the Washington Post, the pro-Trump rioters were seen breaking windows, climbing on rafters, ripping down U S flags and roaming the Senate chamber.

Lawmakers were told to grab gas masks as police deployed tear gas inside the Rotunda, the ornate area under the dome that connects the House and the Senate. “One Capitol police officer discharged their service weapon striking an adult female. She was transported to a local hospital, where after all life-saving efforts fail, she was pronounced deceased. Additionally, there were three other deaths reported today from the area around the Capitol grounds. One adult female and two adult males appeared to have suffered from separate medical emergencies which resulted in their deaths,” Mr Contee told media. Both the House and Senate and the entire Capitol were placed under a lockdown. Vice-President Mike Pence and lawmakers were evacuated to safe locations. Security forces fired tear gas in a four-hour operation to clear the Capitol. Vowing not to be deterred, Congress resumed their work on certifying Biden’s Electoral College win, with debate stretching into the early hours of Thursday.