Doctors in Myanmar carry out early dawn march against coup 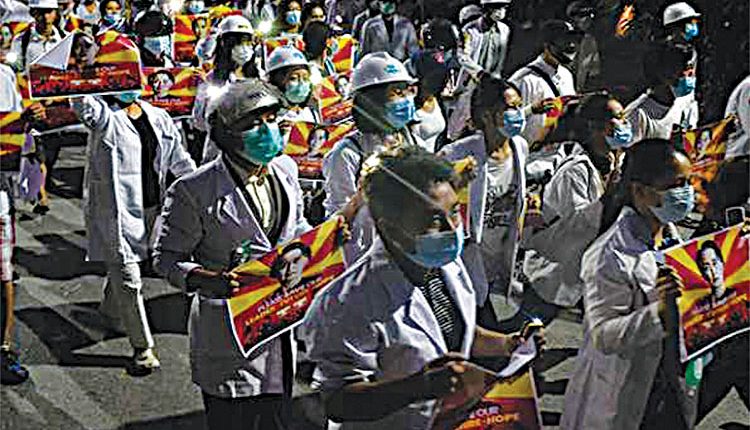 Naypyidaw, Mar 21 (FN Agency) Doctors and healthcare workers in Myanmar’s Mandalay took out an early dawn anti-coup demonstrations on Sunday, staging a peaceful march aimed at minimising the risk of confrontation with security forces. A video posted by the news portal Mizzima showed hundreds of people, many of them wearing white coats, marching on deserted streets on Sunday, chanting “Failure of the military regime, our cause our cause”, Al Jazeera reported.

This latest rally was held as the number of casualties in the ongoing protest rose to 247 across the country, according to the data released by the Assistance Association for Political Prisoners, a monitoring group. According to the monitoring group, almost all the casualties have been the result of firing by the security forces. The doctors’ were joined by engineers in Mandalay who dubbed it a “no-human strike”, an increasingly popular tactic involving lining up signboards in streets or other public areas as proxies for human protesters.

Apart from this protesters in nearly 20 places across the country held candle-lit protests on Saturday night and into Sunday, from the main city of Yangon to small communities in Kachin State in the north and the southernmost town of Kawthaung, according to a tally of social media posts. In some places, the protesters were joined by Buddhist monks holding candles while some people used candles to make the shape of the three-fingered protest salute.