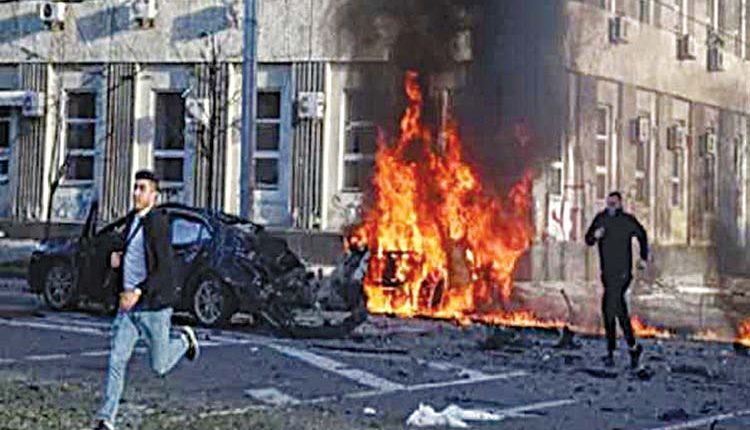 Kyiv, Oct 10 (Bureau) Ukraine cities came under Russian missile attack on Monday as the war entered 229th day, the country’s military chief said 75 missiles have so far been fired in the sudden wave of attacks. General Valerii Zaluzhnyi tweeted that 41 of those were neutralised by air defences. The BBC report said the information could not be verified, but reporters on the ground witnessed and heard several strikes in Kyiv on Monday morning, with reports of many further explosions from other cities around the country. Monday morning’s rare blasts in the capital here followed further strikes overnight in the southern city of Zaporizhzhia and in the Dnipropetrovsk region. “A multi-storey residential building was destroyed again. There are victims,” posted Zaporizhzhia regional governor Oleksandr Starukh on the Telegram messaging app at around 3 am local time.Emergency services attended the scene, he added. Zaporizhzhia has been hit repeatedly in recent weeks, with dozens of people killed, the BBc added. It also followed a “night of massive attacks” in Dnipropetrovsk, according to an update from the region’s own governor Valentyn Reznichenko, who accuses Russia of shelling multiple regions. The Russian air attacks on Kyiv are not over and people must remain under cover, the head of the capital’s regional military administration said.

In a message to residents on Telegram, Oleksiy Kuleba reassured them air defence systems were working, but emphasised “that the air alert is still ongoing”. He also called on people not to photograph or film landing sites of missiles or damaged infrastructure in the capital. “People’s lives depend on it,” he added. The BBC quoted Mykhailo Podolyak, an adviser to President Volodymyr Zelensky, as saying that “deliberate attacks” on the centre of Kyiv, as well as strikes on Zaporizhzhia in the south and Dnipro in central Ukraine are more proof of the “Kremlin’s terrorist inadequacy”. Images and videos on social media showed smoke rising above buildings in several parts of Kyiv. The first missile attacks on Ukrainian capital after many months on Monday appeared to be much more central than Russian strikes on the city earlier in the war, the BBC said. Over 10 civilians have been killed and 24 wounded as a result of missile strikes on Kyiv, an aide to the Ukrainian interior minister has said.Ukrainian President Volodymyr Zelensky said: “They are trying to wipe us off the face of the Earth.” Strikes across Ukraine this morning show that Russia is “trying to destroy us and wipe us off the face of the Earth,” Zelensky said in his Telegram post. He highlighted blasts in Kyiv, Zaporizhzhia and Dnipro, saying “the air alarm does not subside throughout Ukraine.” “Unfortunately, there are dead and wounded,” Zelensky added, before urging his compatriots to stay in shelters. Russia has not yet commented on this morning’s strikes. Several cars caught fire after the attack in Kyiv and over 15 vehicles were damaged, Rostyslav Smyrnov said in a Facebook post. He added that 30 emergency service workers and six response units attended the scene in Kyiv’s Shevchenkivskyy district.Kyiv Mayor Vitaliy Klitschko said missiles have hit “critical infrastructure” in the city.

“The capital is under attack from Russian terrorists!” Klitschko added in his Telegram post. Parts of the city of Lviv in western Ukraine are without electricity following strikes on key infrastructure, the city’s mayor said. Posting on Twitter, Andriy Sadovyi said explosions had occurred at “a critical infrastructure facility” and that the operation of the city’s thermal power plants had been “temporarily suspended”. “Hot water is not provided at the moment,” he said. “Standby power generators at several pumping stations were started to restore water supply to the city. Part of the city without electricity. “He also said a third of the city’s traffic lights were not working and that, once alerts had been lifted, traffic controllers would be in place at the busiest intersections.Russian missile strikes in Kharkiv have hit an energy infrastructure site, causing outages to the electricity and water supply in some areas of the city, Kharkiv mayor, Ihor Terekhov, has said. Three flights of missiles were seen over Kharkiv and “specialists and utility workers are doing everything they can to restore normal life in Kharkiv”, Terekhov wrote on Telegram.Regional head of Kharkiv, Oleg Sinegubov, also confirmed the strikes, posting on Telegram: “The enemy is striking Kharkiv. There are explosions in the city. “For the last couple of hours, there has been constant strike warnings and the sound of explosions around the city, the BBC report added. The wave of attacks comes two days after the only bridge linking Russia with occupied Crimea was damaged in a blast and Russia’s President Putin has been scheduled to chair a meeting of his security council on Monday to discuss the explosion on the Crimean bridge.

Fleeing Indians entering US from Mexico