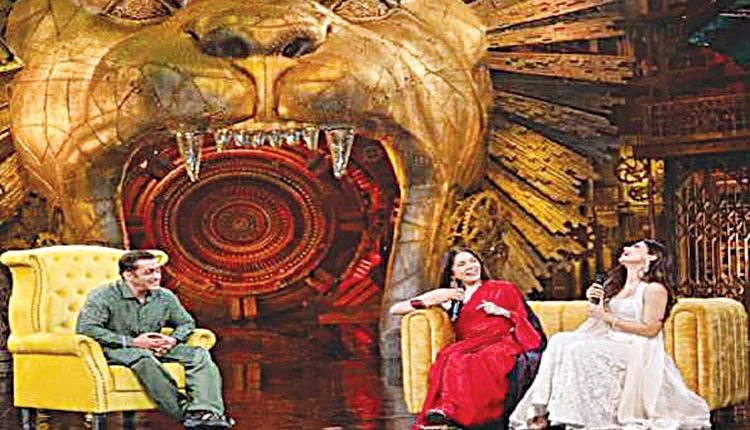 New Delhi, Oct 8 (Agency) The fear of eviction hovers over the contestants of ‘Bigg Boss 16’ which now arrives at its first, ‘Shanivaar Ka Vaar’. Host Salman Khan commenced the ‘Vaar’ by assigning the housemates a task. Each contestant must choose two housemates and declare a verdict by characterising one of them as ‘hit’ and the other as ‘flop’ on the basis of their behaviour through the week. The hit contestants’ are felicitated by a flower garland, whereas the flop contestants’ faces are smothered with foam. The spree of felicitating and spraying foam continues for a while, and it stops when the task arrives at the contestant with the most flop votes. It will be interesting to watch who that contestant is and what’s in store for that person.After the task, the star-studded ‘Vaar’ is graced by the evergreen, Neena Gupta and the gorgeous Rashmika Mandanna.

Both step on to the stage with the megastar for the promotion of their upcoming movie, ‘Goodbye’. The episode witnesses an outpour of entertainment with many fun moments.Rashmika asks host Salman to recite his popular movie dialogue in Telugu. Our favourite host surprises everyone as he says, ‘Devil aapke pichhe, aap devil ke pichhe, too much fun!’ in Telugu. Salman, Neena and Rashmika play ‘The Whisper Challenge’, which takes a hilarious turn as the host easily figures out the phrases while both the guests have a tough time guessing them.No guest appearance is complete without a dance routine. Salman and Rashmika groove on the latter’s hit song, ‘Saami Saami’ and Neena joins them. After acing the hook step of the song, the host introduces each contestant to the stars of ‘Goodbye’ on the show. The contestants couldn’t resist attempting the famous dialogue of the film ‘Pushpa’ in their own style with film’s female lead, Rashmika spreading laughter in the room. Following the flux of entertainment and drama, a palpable aura of tension takes over the house. The contestants wonder who made the best impression before the viewers and who didn’t. ‘Bigg Boss 16’ airs every Monday to Friday at 10 PM and every Saturday-Sunday at 9.30 PM on COLORS.

Tvameva Sarvam, is a real story of a father and son relationship: Dr Jeevan S Rajak