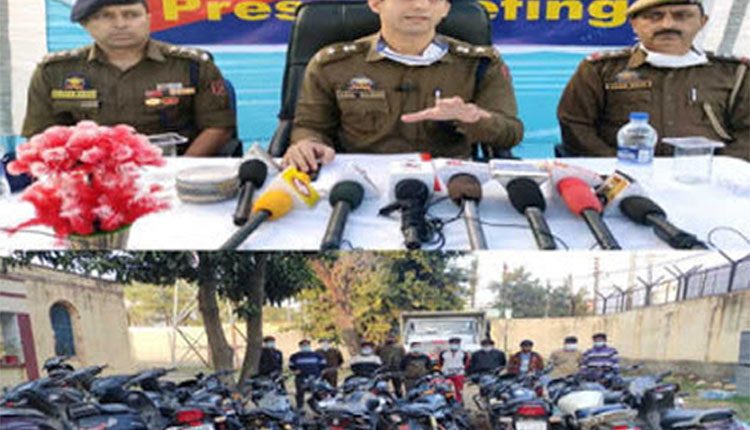 The gang of thieves was zeroed in when after a specific input a special naka was laid at Deoli, Bishnah, he said adding, “during naka checking a motorcycle rider Ashwani Kumar of Deoli was asked to show the registration certificate of the motorcycle.” “He produced the document and an affidavit of sale/purchase for the vehicle but after confirmation and cross-checking the papers produced turned out fake and subsequently a case was registered,” police added. The SP said that during the investigation, a team of police was constituted which raided at different places for the search of accused persons and stolen vehicles. A special team led by SHO Bishnah Tahir Yousaf khan under the supervision of SDPO RS Pura Shabir Khan swung into action and collaborating the technical and human intelligence succeeded in rounding up two more accused namely Deepak Kumar of Tanada and Vimal Kumar of Chak Waizru, he added.

The officer further said that on further investigation, the team arrested six more persons identified as Joginder Kumar, Arjun Dass, Shashi Kumar, Rakesh Kumar, Sikander Kumar and Pawan Kumar. “On their disclosures, 20 two-wheelers were recovered and we are also looking for the affidavit maker who was hand in glove with this gang,” said the SP.