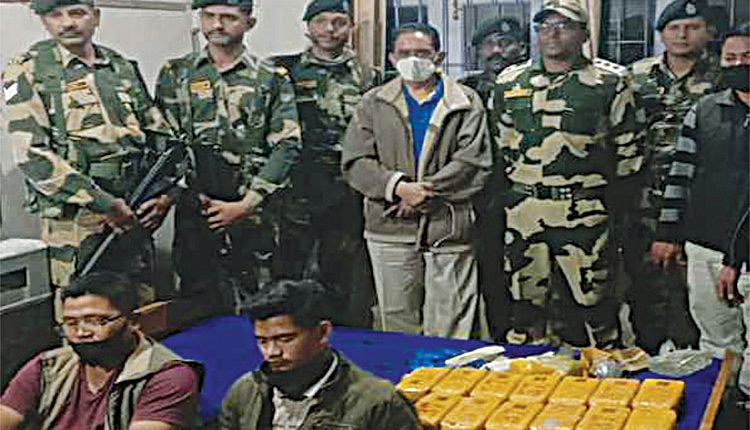 Both the persons involved were detained by the BSF. At once, the BSF party informed the local police of the Police Station of Vairengte and Police out post Bilkhawthlir. The police team of Police Station Kolasib also reached alongwith the team of the Police out Post Bilkhawthlir. Accordingly, the Police team searched the detained persons and the Vehicle which was already guarded by the BSF and untouched in the presence of some VCP members of the local area. The Police apprehended the above persons and took under their custody alongwith seized for taking action as per the law of the land. The trend of illicit trafficking of drugs in the region has shown significant increase in the recent past.

Earlier also on 5th Feb’ 2021, troops of 182 Bn and SHQ BSF in Joint Ops with the NCB, Imphal seized 32 Gms of Heroin and 3,800 Nos of Yaba from Saitu Saparmenia, Kangpokpi district of Manipur and most recently on 12th Feb’ 2021, troops of SHQ BSF Aizawl has also seized 23,800 Nos of Methamphetamine / Yaba tablets from general area Ramhlun, South Aizawl. Of late, this synthetic drug, Methamphetamine, has become the most popular among the smugglers in the country and abroad.

The raw material of these tablets i.e. Pseudoephedrine (precursor/pharma drugs) is being smuggled to Myanmar and it is further processed/converted into a party drugs like Meth, R7, 88 tablets, WY (World is Yours), Yaba tablets and are smuggled into India through porous borders of Indo-Myanmar whereas bulk of it is smuggled to Bangladesh through Myanmar-BD border and also for local consumption in big cities and as Party Drugs. It is also to mention here that the BSF under Mizoram & Cachar Frontier in the year 2020 have seized 51,479 Nos Yaba / Methamphetamine tablets, 290.41 Gms of Brown Sugar, 1,712 bottles of Phensedyl and 1,149 Bottles of IMFL in its drive against Drugs/ narcotics. In addition, the BSF is making all out efforts to make the region contraband drug free by organizing various programmes to eradicate the use of drugs and its abuse & its transshipment. One of the main objective of the ongoing “Maitri Cycle Rally’ of the BSF is also to create social awareness against ill effects of drugs / narcotics abuses among the youths.

One Kg gold worth about Rs 53.5 lakh seized at MIA