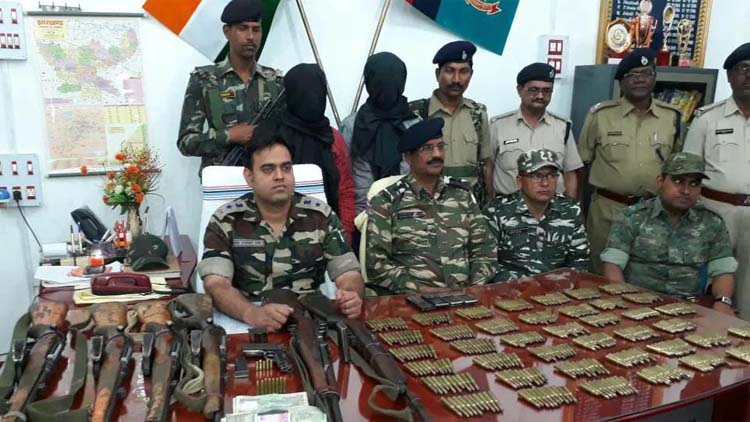 Chatra, May 7 (Agency) Four ultras belonging to the Tritiya Sammelan Prastuti Committee have been arrested by the Chatra police including an area commander of the outfit. From the arrested two regular Insas rifles, 178 live cartridges, 2 magazines, a country made pistol, a desi katta, a wireless set, receipts, 27 live cartridges of .315 bore, 4 cartridges of 9 mm and Rs 6,000 in cash has been seized from them.

The arrested have been identified as area commander Jaggarnath alias Azad, Dilip Kumar Singh, Ashok Ganjhu, and Pandu alias Nitesh Ganjhu. Briefing the press Chatra SP Rishabh Jha said that against Jaggarnath and Ashok several cases are registered in Tandwa, Piparwar and Barkagaon Police Stations. The SP said that a tip off had been received that some of the ultras had gathered in Gonda Pahadi located on bordering areas of Tandwa and Barkagaon police station area after which a team under ASP Nigam Prasad and Assitant commandent of CRPF 22 battalion Uttam Kumar was constituted. The team on Thursday night conducted a search operation in the area and caught thoda four ultras, the SP said.