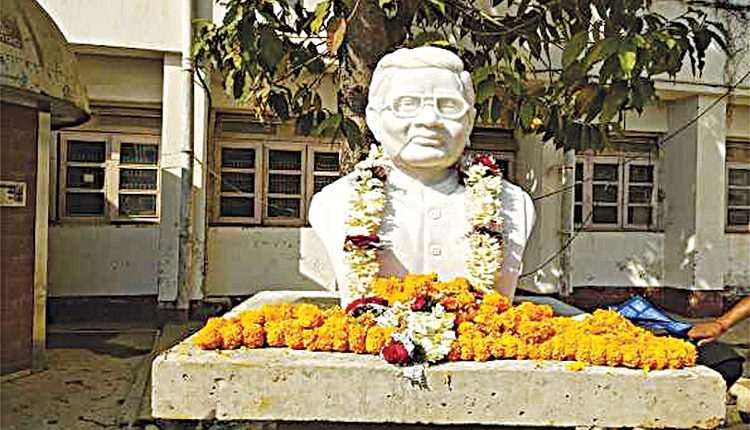 The strain relation between Chief Minister Biplab Kumar Deb and his dissidence MLAs has widened further after the state government registered an FIR against former health minister and ruling party MLA Sudip Roybarman accusing him of illegally installing a statue of former Prime Minister Bharat Ratna Atal Bihari Vajpayee in the Cancer hospital here, which was renamed after Vajpayee during Sudip’s tenure.

Police said based on the complaint filed by the medical superintendent of Atal Bihari Vajpayee Regional Cancer Centre, Dr Gautam Majumdar three workers were arrested from the site yesterday on the charge of illegal construction at government premises. However, Roybarman has neither been arrested yet nor police reached. This is the third case against MLA Roybarman by the state government in the past six months. The first case was registered during Covid when there was massive chaos in Covid Care Centre in the city due to lack of amenities and services, Roybarman had visited the centre falls under his constituency wearing PPE kits. But the authority filed a case for illegal entry into the centre violating Covid guidelines. Two months later, when the allegation was raised for the death of Covid patients in the hospital lack of Oxygen supply and treatment, Roybarman along with a biomedical engineer had gone to hospital after getting SOS call from the on-duty doctors and patients complaining that suddenly pressure flow in Oxygen supply line to patients on ventilation fell down critically for a couple of hours had become a life threat. However, denying the allegations of illegal construction in the hospital campus, MLA Roybarman said that he had written a letter to the medical superintendent of Cancer hospital seeking permission and nobody had objected to his gesture.

Roybarman said when he was health minister cancer hospital has been named as Atal Bihari Vajpayee Regional Cancer centre. He claimed as an attempt to pay him tribute by installing a statue getting it unveiled by the Chief Minister and Governor on his birthday today.” “Accordingly, I have invited Governor along with MLAs Ramprasad Paul, Asish Kumar Saha and Sushanta Chowdhury and the governor has also given consent. I also called the CM but he didn’t receive it and had also written a letter but no response came. We are members of Rogi Kalyan Samiti as well. We placed a proposal and MS of Cancer hospital has shown us the place where the statue will be installed. When our workers started working all of a sudden police arrested workers, a case was also registered against me at the NCC police station.
I will leave it to the judiciary. But I am sorry to say things didn’t end well. Whatever decision they say or pass on I will abide by their instruction”, Roybarman said. Meanwhile, Medical Superintendent of Cancer hospital Dr Majumdar stated in the FIR that he had received a letter from MLA Sudip Roybarman and came to know that he would install a statue Vajpayee to celebrate his birth anniversary on Dec 25 and added, “I have convinced the matter to the higher authority and wrote to him stating that his proposal requires government permission. Also, I requested him to refrain from further construction work till government approval is received.”

Creating a Slide of Possibilities with PowerPoint Presentation Services