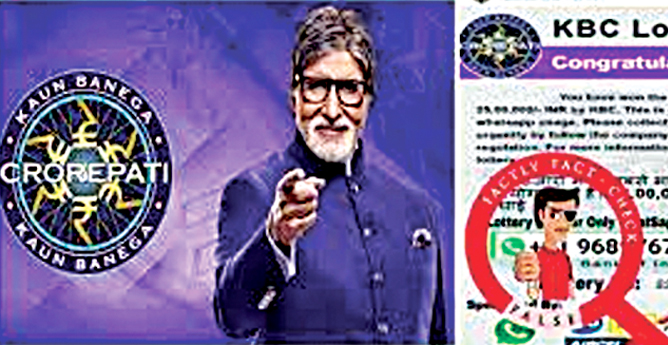 Hyderabad, July 5 (Representative) The city police arrested 11 persons belonging to Delhi and Uttar Pradesh for cheating public to the tune of Rs 40 lakh in the name of KBC lottery and OTP. A police statement here on Tuesday said, a house wife of Khairatabad received a phone call on October 2, 2021, in which she was informed that she won a lottery of Rs 25,000,00 by KBC and they directed her with the withdrawal procedure. The caller advised her to deposit amounts towards various fees. Some other people in the name of the Bank Manager also talked to her and convinced her to send money. She sent a total amount of Rs 39 lakhs in the name of different charges.

In another case, a woman resident of Kanchanbagh, Hyderabad City received a call on April 11, 2022 from 8953676652 claiming to be from SBI Credit Card division and offered to redeem reward points into cash. The victims listened to them and followed their instructions. She also revealed the OTP received on her phone. In three transactions of Rs 20,000, Rs 40,000, Rs 40,000 in consecutive attempts, she lost a total amount of Rs 1 lakh. The modus operandi was that the accused call the victims and introduce themselves to bank officials calling from the Head Office. They lure the victims in the name of reward points over their credit cards. Later, they convince the victims to reveal their card details for redeeming the reward points. When victims reveal their card details, the accused make POS transactions and obtain the OTPs from the victims and complete the transactions. The accused are also running a call-centre at Noida to carry out these illegal activities. Initial investigation reveals that the accused are involved in 18 cases across Telangana state and 101 crimes all over India, the statement added.