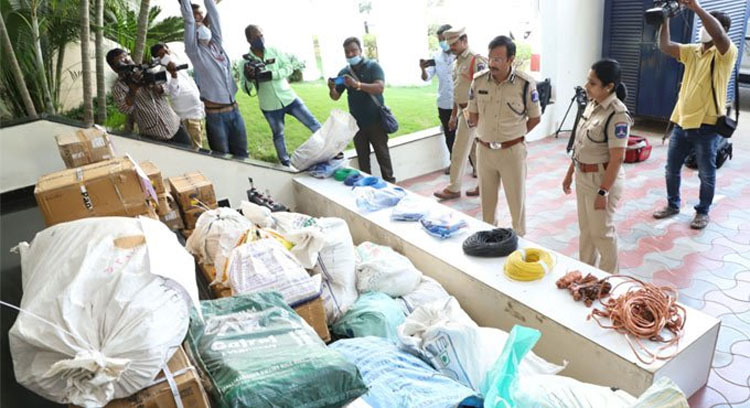 Hyderabad, Jan 13 (Representative) Police on Wednesday arrested a nine-member dacoit gang and recovered property worth Rs 55 lakh from their possession. The recovered property included a net cash of Rs 9.5 lakh, one pistol (Tapancha) with 3 rounds, large number of electrical wire bundles, copper pipes and cables, AC Copper Cables, 11 mobiles and among others. Two receivers of the property were also arrested. On credible information, Dundigal Police team with the assistance of Medchal Police, SOT Balanagar and SOT Shamshabad Police nabbed the dacoit gang who had committed series of seven dacoits in the limits of Cyberabad Commissionerate, a police release here said. All the accused persons are electricians and hailing from Rajasthan, Uttar Pradesh and Telangana.

They had earlier worked in Delhi where they all got acquainted. Earlier they worked for 6 months in a Muppa company as a daily labour for Rs 400 per day. After that they all went back to their native places except the gang leader Pradeep Kushwaha . The gang was addicted to a lavish lifestyle, the release said and hence they decided to steal the material from the workplace.

CSMIA delivers over 2.70L doses across 22 destinations in India