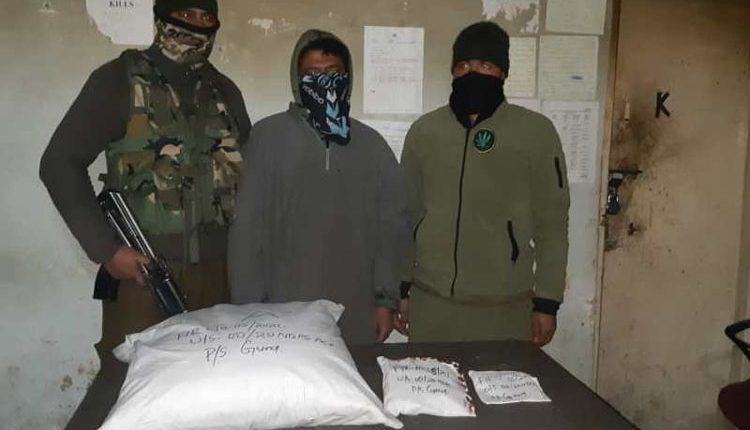 Srinagar, Feb 9 (Agency) Police on Tuesday arrested four drug peddlers and recovered contraband from them in two separate places in Kashmir valley. A police spokesperson said that following specific information, a checkpoint was established at Ganastan village in north Kashmir district of Bandipora. ‘’Police intercepted a scooter at the checkpoint and during checking, recovered 15 kg of Charas powder,’’ he said, adding the rider, identified as Parvaiz Ahmad Beig, was immediately taken into custody. ‘’Accordingly, a case FIR No.14/2021 under relevant sections of law has been registered in Police Station Sumbal and investigation has been initiated,’’ he said. He said during a surprise naka checking at Sebdan bridge in central Kashmir district of Budgam, police party intercepted three persons roaming suspiciously.

‘’During their search, 10 grams of Heroin, 2 lts of Codine Phosphate and 74 Tablets of Alprazolam were recovered from them,’’ he said. He said the accused have been identified as Muzamil Ahmed Khan, Mukhtar Ahmed Wani and Rafi Ahmed Dar. ‘’Community members are requested to come forward with any information regarding drug peddlers in their neighbourhood. Persons found indulging in drug peddling will be dealt as per law,’’ he said. ‘’Our consistent actions against drug peddlers should reassure the community members that we are making efforts to keep our society free from the scourge of drug menace,’’ he added.